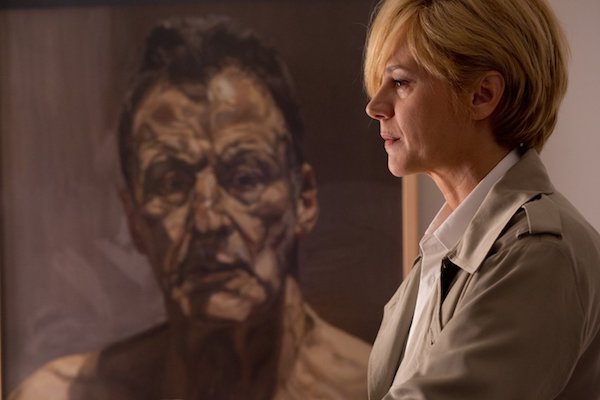 Folds of red fabric. Red nails. Red kitchen wall. From the first -- but not the last -- sight of all this red, Pedro Almodóvar glides away from his source material. He based the double-story of the title character on a conflation of three short stories, written in 2004 by Canadian Alice Munro.

Munro's stories read more beige than primary colored, but Almadovar's stunning film streams forth in reds and blues and yellows. He takes a mature woman, confronts her with a slap from her past, and he follows her to closure. Julieta lives rather serenely in Madrid with her lover, Lorenzo. They have plans to move to Portugal.

Then Julieta runs into Bea, her estranged daughter's former best friend, who tells her that the daughter Antia lives in Switzerland with three children. Julieta drops Lorenzo and removes to the apartment she had with Antia, hoping for a connection. To while away her time, Julieta starts a journal, its white pages, as white as a sheet on a dead body. They are a great contrast from the red of her nails as she sensually smooths the pages at the inner seam. She writes her memories of meeting Antia's father, of their love, of his love for a sculptor, of Julieta's for her daughter, and of her daughter's for Bea.

Julieta interprets a woman's complex story, something Almadovar does so well, through a series of still lives: red frosting, a blue sweater -- a fine film.