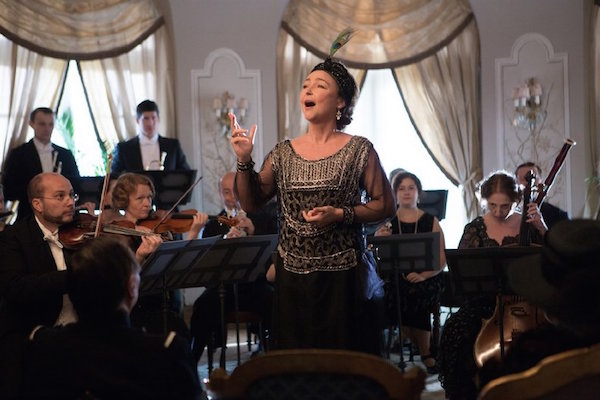 Coming out in the same year are two movies about two women who thought they could sing. Meryl Streep plays the American, Florence Foster Jenkins, and Catherine Frot plays the French, Marguerite Dumont. Both performers had more money than self-awareness as both singers could peel paint off walls with their voices.

Marguerite well presents the conflict involved in responding to innocence. Is this woman delusional or crazy or just tin-eared? Marguerite Dumont had money and married a man with a title. She loves him with the same vibrancy that she loves classical music. Her money buys her intimate concerts in her home with the Amadeus Club. She wants to sing in Paris though her voice pierces like her peacock's.

Her husband Georges does everything he can to avoid these concerts, which she does not like even to start without him. Her servant Mandelbos honeys around her, shoring her up by photographing her. But he is also selling those pictures to exploit her. Denis Mpunga excels in the role. Also eye-fetching is Michel Fau as her teacher with his Fellini face and pageboy.

Director and writer, Xavier Giannoli, does an excellent job of showing the fine lines between sycophancy and exploitation, comedy and tragedy as those around Marguerite lie to her face with plastered smiles on their faces and cotton balls in their ears. Yet, some, like a music critic, applaud her kindness and innocence. Frot is marvelous as Marguerite.

Glynn Speeckaert, the Belgian cinematographer, recreates theatrical light and shadow in Marguerite's music room, with the swinging chandelier. Giannoli weaves a theme of eyes throughout, starting with a giant eyeball prop and focusing on the eye in a camera.

Marguerite offers pathos bathed in luxury and delusion with a hint of compassion. No one wins.