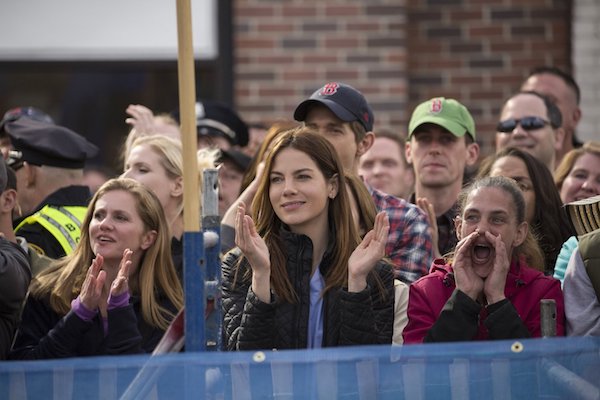 All terrorist actions leave scars, the cruelty unfathomable. One such event, still immediate in its pain, is the Boston Marathon bombings, April 15, 2013, that stunned and shocked the nation in its targeting a celebratory, illustrious race. Director/co-writer Peter Berg's Patriots Day honors the Boston strong who faced and triumphed over that horrific tragedy.

In the opening scenes, the film effectively axnd appealingly presents snapshots of many impacted by the bombing, including police, government officials, marathon runners, and spectators. Various personalities are established as the individuals go about their daily routines, thereby nicely defining the event and the locale. It's a special day because of the Boston Marathon, known as Patriots Day, but it's nothing extraordinary beyond that, until -- and it is that "until" that creates suspense and tension. With the bombs' blasts, the mood and style changes with rapid, exceptional editing and chilling recreations.

The blasts themselves feel horribly real as any, and the chaos that follows is unnerving. Wisely, Berg resists sensationalizing the aftermath, preferring to let honest depiction suffice with details of the way authorities identify the Tsarnaevs making surveillance footage examination compelling, and one unbearably tense scene depicts the car hijacking of Chinese student Dun Meng. By contrast, a particularly powerful scene is one of the quietest, the interrogation of Tsarnaev's wife.

Solid performances bring the participants to life. Central among them is Mark Wahlberg as composite character Tommy Saunders, a complex sergeant working his way off suspension with assigned duty at the marathon finish line, and Michelle Monaghan as his wife Carol. Also superb are John Goodman as Commissioner Ed Davis, Kevin Bacon as Special Agent Richard DesLauriers, Jimmy O. Yang as Dun Meng, and J.K. Simmons as Jeffrey Pugliese in Watertown. The interlocking these Bostonians lives asserts the fact that terrorism impacts a community, a truly important reminder.

Patriots Day ends with comments from survivors and officials, followed by photographs of the four killed. I can't imagine a dry eye in the house in what is an exceptional film about a horrid event. For some, myself included, it offers some emotional catharsis in its honoring the medical staff, the officers, and the entire Boston community. At area cinemas.