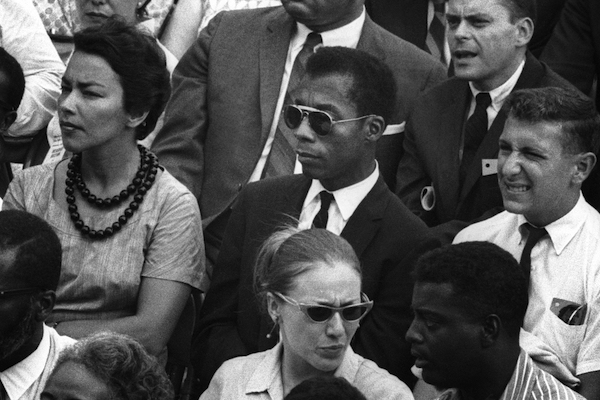 'I Am Not Your Negro' documents James Baldwin's words and world

In the documentary I Am Not Your Negro, director Raoul Peck dramatizes writings by James Baldwin that interrogate the assassination (1963, 1965 and 1968 respectively), of dear friends Medgar Evers, Malcolm X and Martin Luther King Jr. Beginning his project "Remember This House" in June 1979, Baldwin wrote, "I want these three lives to bang against and reveal each other."

Through this powerful, poetic piece, Baldwin aimed to describe and expose the true history of America which is that of race, as he asserts. The thirty pages of notes Baldwin completed before his death in 1987 also indict class and religion from his astute perspective. Baldwin explains why he did not join the N.A.A.C.P., the Black Panthers, Muslim or Christian groups, and Baldwin's striking insights are as valid today as they were over three decades ago.

Cross cutting between snippets of speeches by King and Malcolm highlights a virtual debate between their ideologies along with Baldwin's comments on Malcolm's appeal and his own dissent. Peck expands this presentation of Baldwin's ideas by interweaving archival footage of Baldwin holding forth on the Dick Cavett Show, speaking at a 1965 Cambridge debate, traveling with Evers, and targeted by J. Edgar Hoover's FBI. He juxtaposes photographs of demonstrations connecting civil rights protests to tragic, 21st century black killings, especially Ferguson and the Black Lives Matter movement.

Further documenting Baldwin's thoughts and time are notes to his literary agent Jay Acton, his comments on Attorney General Bobby Kennedy's disappointing meeting with Raisin in the Sun author Lorraine Hansberry, and some elegant shots that bring Manhattan and other locales to life. Clips from and comments on racist Hollywood films and advertisements add further content and context to this impressive overview of black history and these momentous individuals. Interspersed throughout the film, Samuel L. Jackson eloquently reads Baldwin's words. A most fitting tribute, especially in black history month, I Am Not Your Negro screens in an exclusive engagement at Landmark's Tivoli Theatre.