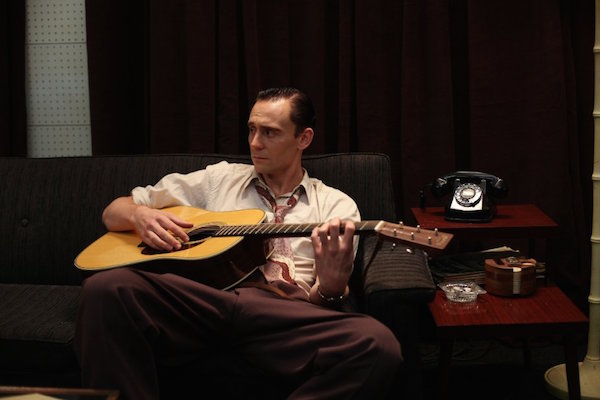 'I Saw the Light' fusses over Hank Williams

For a film about a musician, I Saw the Light has precious few moments of music. The bio-pic about Hank Williams follows his short life -- he died at 29 with nearly 40 hits -- right down to dates in the corner of the screen but does not follow the music.

Tom Hiddleston, the fine British actor, delivers the notes with more croon than angst -- he certainly has the glottal stop down. He also delivers the physical appearance of the lanky Hank, his back curved by a form of spinal bifida. But Hiddleston floats above the story, never inhabiting the bio of the pic. That could just be the fault of the scriptwriters, including the director Marc Abraham and Colin Escott, who co-wrote the biography. It's a skim, not a swim, of a role.

The story covers Williams's beginnings as he struggles toward the Grand Old Opry in Nashville while singing at radio stations and marrying in 1944 at a gas station. The film suggests that Audrey May, who considered herself a singer, too, was a jumping-bean hellbent to up Williams' ambitions. Audrey had to endure put-downs and pity and the endless parade of women glued to Williams's sequined suits -- it was not enough that Audrey had to deal with the man's alcoholism and physical frailty. Elizabeth Olsen turns in a wired performance when she's on screen with Hiddleston. I Saw the Light is one of those films where the performances, including Cherry Jones' as Mother Williams, work well beyond the script -- as hard as that is to figure. As for production values, I Saw the Light also plays with light, starting with Williams, solo, in the spotlight, his sight obscured by his hat as it often is. The film does elucidate Williams' little known alter ego, whom he called "The Drifter," but the Wikipedia entry on Williams' life has more energy, more sparks, than the whole of I Saw the Light. Hank Williams left a greater legacy than this film will.