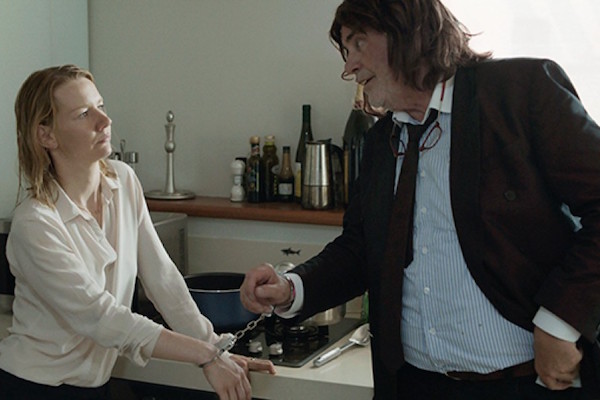 In Toni Erdmann, Ines enjoys a relatively successful career as a German management consultant based in Bucharest, Romania. Her demanding job, to which Ines commits her time and energy, leaves no room for her father Winfried who repeatedly shows up unexpectedly and weasels his way into meetings and receptions, formal and informal, to Ines' dismay.

He clearly doesn't conform with his ugly black wig, false buck teeth, and embarrassing antics that surprisingly win over some colleagues with their honesty. Adopting Toni Erdmann as his fictitious identity, Winfried means well -- to jolt Ines from her capitalist treadmill existence to a more joyful, childish, if not childlike, exuberance. By film's end, Ines has, quite predictably, become sympathetic, if reluctantly so. A reception Ines hosts late in the film for company team building spectacularly signals her evolution as it becomes a party au natural, no clothes allowed with full nudity.

German writer/director Maren Ade's droll and at times challenging sense of humor won't appeal to everyone nor will the film's two hour 42-minute running time. In press notes, Ade says that in fact Winfried must resort to humor as his only weapon to reach Ines who is, to quote, "a tough cookie herself" in this "conflict between generations."

Anchored in this father-daughter interaction between Ines and Toni, a great deal of the film's appeal and credit for its success go to Sandra Hüller as Ines and Peter Simonischek as Toni. They flawlessly and unselfconsciously register a diverse range of emotions from amusement to irritation, resentment to appreciation, even within the same extended scene. Moreover, her fragile, petite presence contrasts humorously just visually with Toni's bulky bearing, heightening their conflicting emotional postures. They're a bit Laurel and Hardy.

Toni Erdmann is a film that surprises with its offbeat approach and its refusal to conform in its subject matter, its length, or its style. It won over critics at Cannes, the Golden Globes, the European Film Awards, appears on several prestigious top-10 lists, and is nominated for the Best Foreign Language Feature Film Oscar. Full female and male nudity make this for mature audiences only. In German and Romanian with English subtitles with some English as well. At Landmark's Tivoli Theatre.