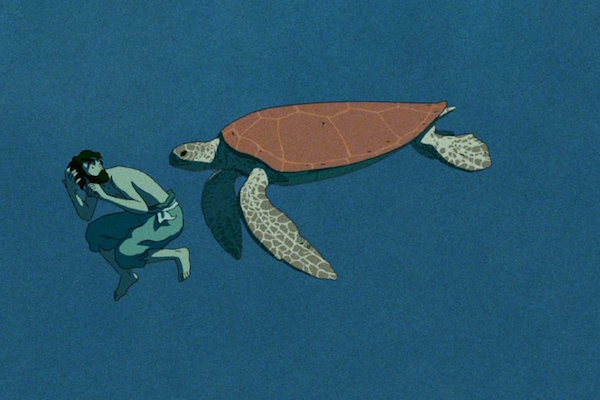 'The Red Turtle' speaks volumes without saying a word

Dutch writer/director Michael Dudok de Wit has become the first European animator selected by Japan's Studio Ghibli to be the talent creating their feature The Red Turtle. Dudok de Wit is an inspired, wise choice. He understands the appeal of simplicity and the power of understatement, the more Eastern aesthetic of less suggesting more.

This is certainly the case with The Red Turtle, which includes no dialogue, and yet it speaks quite eloquently about human and animal nature and natural elements. The situation is simple: a storm deposits a man on a desert island, a castaway scenario. Using resources from the bamboo forest that covers the island, the man repeatedly builds rafts, increasingly better ones, to attempt an escape, only to have the title turtle confront him with other ideas. I'll reveal no more as unexpected events follow in this rich, symbol-laden fable.

Dudok de Wit has written that he "hoped to convey my deep love for nature: for the beauty of light and shadow, the special ambience of warm nights and rainy forests, and the naturalness of death and birth." Adding an emphatic emotional element, composer Laurent Perez del Mar's score never intrudes disagreeably on events though it magnificently interprets them.

Studio Ghibli is justifiably famous among those of us who love elegant animation on serious topics, among them My Neighbor Totoro, Grave of the Fireflies, Spirited Away, Princess Mononoke, Howl's Moving Castle, and Ponyo. I could go on so beloved are these films from 1986 on. Dudok de Wit works wholly within the Ghibli style, preferring, as quoted in The New York Times, "films that are monochromatic. It gives a purity and simplicity to the image," a complement to the minimalistic line drawings that nevertheless express realistic movement. This is a film to relax into, to enter as in a dream, and to relish for hours and days afterward.

Two and a half years in production, The Red Turtle was well worth the wait. Winner of the Special Prize in last year's Cannes International Film Festival's Un Certain Regard section and an Academy Award nominee for Best Animated Feature Film, The Red Turtle is playing at Landmark's Tivoli Theatre.