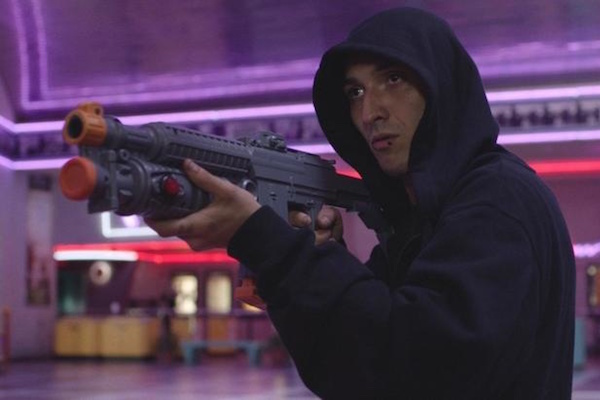 'Dark Night' follows individuals an average day up to their murder

Elliptical and elusive, Dark Night offers vignettes of five individuals' lives over the course of a day. They will enter a movie theater, never, we know from opening shots, to leave alive. Writer/director Tim Sutton's dramatization explicitly alludes to the 2012 Aurora, Colorado, massacre and imagines also the shooter's day, though we're not sure of his identity early on.

The title Dark Night fits that tragic evening and also reminds us that "The Dark Knight Rises" was showing at the Colorado multiplex where twelve people were murdered and 70 wounded. A briefly glimpsed television screen further solidifies that connection with commentary about the mental evaluation of James Holmes at trial. It's chilling, added to the opening shot of red and blue police lights reflected on the close-up of an eye with a stunned woman sitting on a curb. We've seen the end before the lead up to it.

Stylistically, the film is reminiscent of director Gus Van Sant's Elephant on the Columbine massacre, though Dark Night mercifully does not include any graphic footage of the killings. Rather, Sutton shows the routine events of an ordinary day that culminates in what should be a pleasurable escape to the cinema. The young men and women share little more than that unfortunate connection.

Throughout the vignettes, Sutton minimizes dialogue, relying on visuals to chronicle this fateful day's events. The camera tracks with individuals or watches from a distance, the women regrettably, but accurately for our culture, sexualized. A sense of dread builds with the day's natural, sunny beauty shattered by the pervasive violence in video games, at target ranges, and in angry fantasies. And it is not just the killer participating in this widespread, oppressive gun culture defined by an ambiance that often feels alienating.

Of note, Maica Armata's haunting music plays during the introduction, skateboarding, bicycling, a woman lounging in a swimming pool, the murderer trying on masks and other events. Dark Night screens at Webster University's Winifred Moore auditorium Friday, March 3 through Sunday, March 5 at 7:30 each evening.