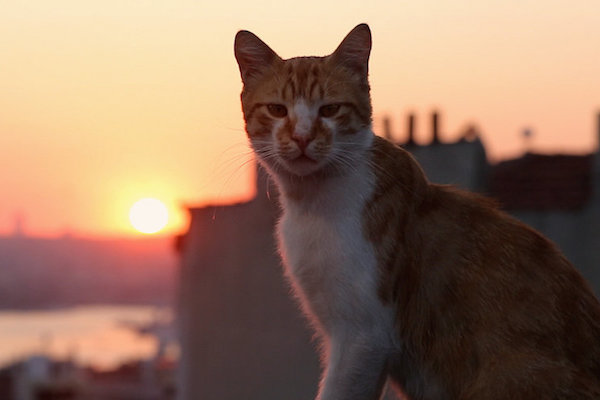 If all you know of cats is what you see on Facebook, you will be amazed by Kedi. If what you know about cats comes from your resident feline, you will be soothed and assured by Kedi. This documentary explores the world of cats in Istanbul, where they reign and roam.

Director Ceyda Torun wanted to show the humanity behind the people of Istanbul, and the best way she found to do so was to concentrate on the cats they care for. So she introduces seven cats: Among them, Bengü is a lover; Sari hustles for food for her babies; Psychopath fights off other cats, including any flirting with her "husband"; and Aslan is the hunter.

One velvety grey cat will not enter the bakery but paws the window to express hunger. Another lovely cat leaps into a woman's first-floor apartment house from the crotch of a tree, eats, looks around, and leaps back out. One man, who had a breakdown, found mental health by caring for cats; another woman whomps up great pans of food and feeds more.

This is the way it's been for years, with the inhabitants feeding the cats, petting the ones who will allow it, grooming them, and medicating them. What no one seems to do is castrate or spay them, for there are kittens everywhere. Yes, they're cute, but a lot of them have to die in the streets of Istanbul of hunger or traffic. Once, Istanbul offered green spaces for cats to hunt and loll, but with development there are few places for the cats to find nature. That means that the people of Istanbul must care for these creatures.

Torun's cameras sneak into a rat hole or under tables to follow the cats. She captures their faces, from eyes to whiskers to brick red noses. But she also shoots the city from on high, creating some amazingly beautiful cityscapes. More than anything, she captures the community of cat lovers whose philosophy is to love their feline neighbors as themselves.