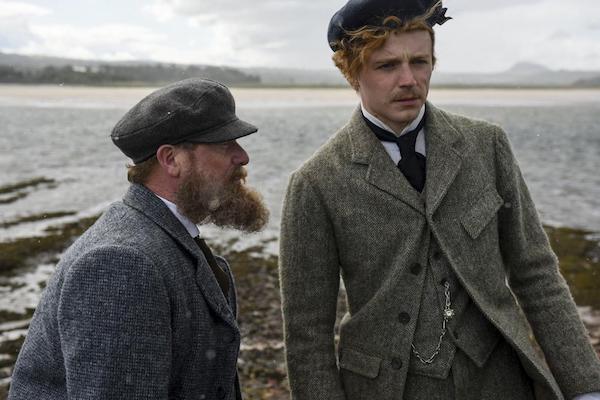 He also accurately assesses the game, saying, "What I like about golf, you see it's impossible but put everything into it." And Tommy does with astonishing success, though he maintains equilibrium, demonstrating formidable backbone and admirable character, in his love life as well. Through multiple father-son conflicts, Tommy asserts, "Golf is your god, dad, but it's not mine." Greens-keeper at legendary St. Andrews, Tom Senior, who made their golf clubs and balls, loved the game.

Both father and son were inducted into the Golf Hall of Fame. Tom is regarded as the founding father of the modern game, competing until he was 75 and the oldest at 46 to win the Open Championship which he originated in 1860, along with 18 holes per round. Tommy developed new clubs, used more than others in the 19th century, and started carrying them in an arrow quiver. But it's the spirit and immersion in the competition and the gambling that supported it that dominates Tommy's Honour.

Cinematographer Gary Shaw begins the film using drone photography for gorgeous, sweeping shots of Scotland's coast. The Scottish locations forcefully communicate the weather—the wind and the chilly temperatures—during the matches. In addition, the judicious use of close-ups highlights facial expressions, emphasizing emotional interaction. Optimizing use of natural light, Shaw balances an impressive blend of character and environment—the golf challenges plus individual struggles. As Tom Senior, Peter Mullen is wonderful, but it's Jack Lowden as Tommy who steals the film with his impish charm. The superb acting saves the plot which revolves around familiar themes: father-son discord, an unconventional romantic partner, and issues of class. Its quality makes it appealing to more than golf lovers.