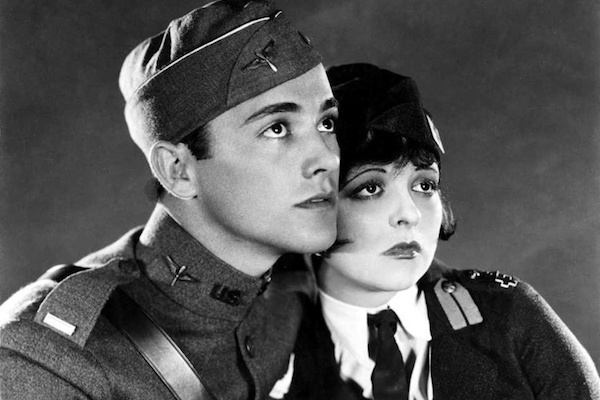 Silent films do not receive the praise they deserve, primarily because they don't get the exposure they merit. Each year, when they do screen, they inevitably confirm that, with all our technical expertise, we've never surpassed the stunning aesthetic compositions, the superb acting, and the compelling narratives on display in the best silent films.

Fortunately, April 14, the magnificent Wings (1927) will be shown with live musical interpretation provided by France's Prima Vista Quartet, featuring a violist, two violinists, and a cellist plus, for this special occasion, trumpet and percussion musicians. Director William Wellman drew on his own WWI French Foreign Legion aviator combat experience, including being shot down by anti-aircraft fire, to dramatize this story of two American fighter pilots, Jack Powell and David Armstrong, engaged in air battles against the Germans. Both men also compete for the love of Sylvia Lewis while Mary Preston, who becomes an Allied ambulance driver, truly loves Jack.

William Wellman, nicknamed "Wild Bill" for his wartime bravado, insisted the aerial footage be perfect, from completely realistic skirmishes to beautiful cloud formations for which he'd wait days, shooting on location in San Antonio. This perfectionism almost got Wellman fired more than once, plus Wings cost over $2 million and took seven months to shoot. It did prove immensely popular, noted especially for the concluding aerial Battle of Saint-Mihiel. Still ranked among the greatest films, it received the first Best Picture Academy Award.

Wings helped launch the career of Gary Cooper, who appears in the small role of Cadet White, and reinforced the appeal of the '20s "It Girl," Clara Bow as Mary. Charles "Buddy" Rogers stars as Jack Powell, Richard Arlen as David Armstrong, and Wellman plays a German pilot who rolls his plane.