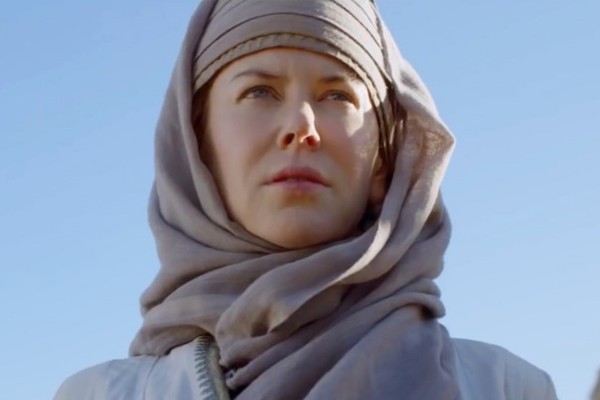 Writer/director Werner Herzog has amassed an impressive body of fiction and nonfiction work stretching back to the 1960s. Just released, his 2015 Queen of the Desert will not rank among his best biographical profiles, though, as usual, he's drawn to an individual challenging conventional morés. In this case, it's Gertrude Bell, an extraordinary, late-nineteenth, early-twentieth-century woman.

An accomplished writer and linguist who traveled extensively through what we'd now call the Arab world and the Middle East, Bell also showed expertise in archeology and cartography, influencing some troubled borders that still exist today. She knew T.E. Lawrence and important representatives of the British Empire to whom she was political advisor during and after WWI, including Winston Churchill. From encounters with Bedouins and Druse tribal leaders, among others, she brought unique insight and analysis.

However, Queen of the Desert fails to do her justice. Typical of films focused on women, it dwells too much on her romantic involvements rather than the complexity and significance of her intellectual and emotional achievements. Her striking photographs flash much too quickly, with time spent on spurious threats that build and dissipate. With a surprising lack of unity, Bell's point of view is abandoned in a late scene though she's anchored the film until then. More annoying, swelling music, which often hearkens back to "Lawrence of Arabia," accompanies numerous scenes. Salvaging some of its two hours and characteristic of Herzog, time lapse shots (of clouds, in particular) and footage of the Nefud Desert environment are breathtaking.

Herzog also scores points for casting Arabs in those roles. But as much as I like Nicole Kidman, as Bell she's too delicately presented and Damian Lewis looks a bit at loose ends as love interest Charles Doughty-Wylie. James Franco as Henry Cadogan and Robert Pattinson as Colonel T.E. Lawrence are acceptable without impressing. There's a great film waiting to be made about Gertrude Bell, a unique, multitalented individual not adequately captured in Queen of the Desert. Primarily in English with some Arabic with English subtitles. Check local cinema listings.