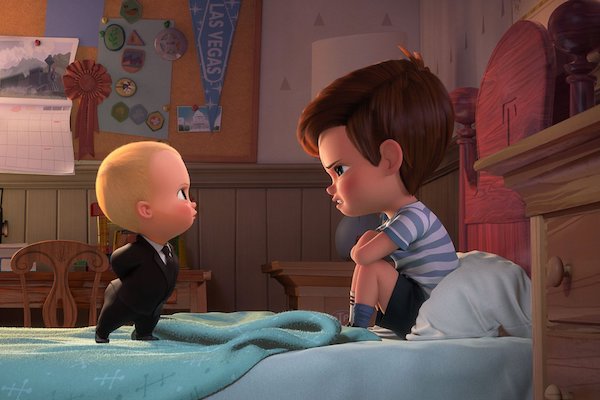 The voice-over intones, "Life was good. Life was perfect." Life for this voice of a seven-year-old will change the minute the baby arrives. This baby shows up, not in a onesie, but in a suit and carrying a briefcase. Suddenly, life is not so good.

Well, not for a boy named Tim, a boy with a wildly wonderful imagination, a boy used to being an only child, loved all over by his mom and dad. And then the new baby arrives to boss the family with demands to be fed and changed and entertained. Sibling rivalry is common, yes, but siblings where the baby is more grown up than the big brother? Where the baby has a mission?

The babe in the suit has been sent to deal with the dastardly actions of the Puppy Co. CEO, out to steal the hearts and minds of the innocent in the age-old popularity battle between puppies and babies.

The wondrously silly plot is based on a book by Marla Frazee in a script by Michael McCullers, with credits on Austin Powers films. The writers are responsible for the dialogue between the baby and his brother, lines that play on the old reversal of babies demanding decent sushi in a very adult, even Mafia-like bossy voice.

That's the real voice of Alec Baldwin, the actor who used his gravel to animate the boss on 30 Rock. Playing the enemy voice to perfection is Steve Buscemi. Included in the voice cast are also Jimmy Kimmel as Tim's dad and Lisa Kudrow as his mom. Tobey McGuire is the voice of adult Tim, and the boy Tim is voiced by Miles Bakshi, the grandson of animator Ralph Bakshi.

The admirable animation is by DreamWorks Animation. The Boss Baby dandily delights kiddo's and adulties alike.