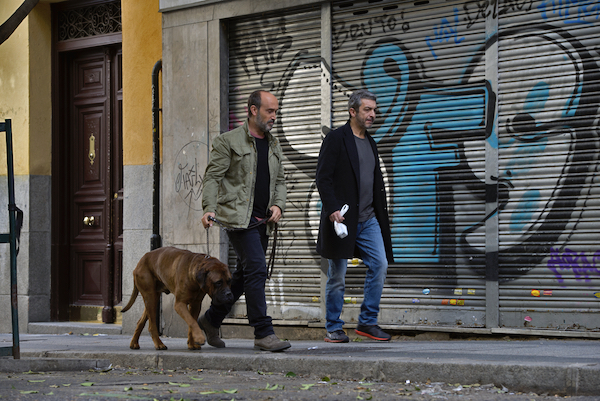 Ordinarily, a visit from an old friend calls for drinks and dinner, trips to old haunts, and tête-a-tête, plus reminiscences. But when one of the friends has decided to cease chemotherapy for the cancer he's fought for a year, the visit becomes something else. It undergirds this moving movie.

Tomás travels to Madrid from Canada to visit Julian for four days, which constrain the film's story in time. He admits that his wife insisted he visit Julian, that he spend no small amount of time trying to talk Julian out of his plan to die on his own terms. Tomás realizes quickly that Julián's mind is made up and that his role is to accompany Julián to deal with matters. Julián even praises Tomás for never wanting payback.

These include negotiating with the undertaker and saying good-bye to some of Julián's many women friends, including his ex-wife. Julián confronts old friends who are afraid to speak to a dying man; he even confronts the husband of a woman he slept with. The friends fly to Amsterdam -- on Tomás' peso -- to make sure that Julián's estranged son accepts his father's decision. They interview people to adopt Truman, Julián's faithful bull mastiff.

The two tease each other, with Julián spearing Canadian Tomás for living at the North Pole or in Greenland. But the two are friends, good friends, mercifully together. Each morning, Tomás asks his friend, "What surprise to you have for me today?" At the airport at their last good-bye, Julián says, "They've gone fast, these four days."

Ricardo Darín and Javier Cámara, who played a cardinal in television's The Young Pope, inhabit these men, close yet different. They ground the realistic film in a sympathetic, loving way from the script by Tomás Aragay and Cesc Gay. Gay directed Truman with understanding but without drippy sentiment.