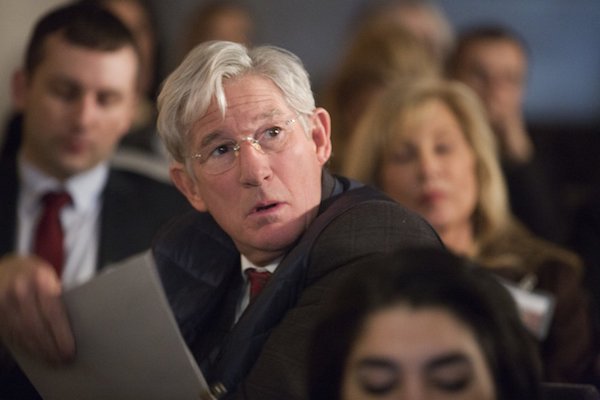 'Norman: The Moderate Rise and Tragic Fall of a New York Fixer' recounts that story

The title Norman: The Moderate Rise and Tragic Fall of a New York Fixer accurately summarizes the central character's trajectory suggesting that the interest lies in the narrative's unfolding and the man at its center. Indeed, Norman Oppenheimer is one politically astute individual who wheels and deals, truly believing in his own clever machinations -- until he can't.

Repeatedly throughout the film Norman talks himself into a corner only to weasel out, dodging and weaving verbally with the aplomb of a con man who exudes confidence in his own charm. As with good tricksters and shape shifters, their success relies heavily on our desire to believe what's often too good to be true. In this case, Norman works his marks, seeking to impress everyone from his local rabbi to the ambitious, upwardly mobile Israeli Deputy Minister he intentionally intercepts from a conference. A gift to him beyond Norman's financial means endears him to the politician in ways that will play out with successes and failures.

With Richard Gere playing Norman, it quickly becomes obvious that he's lost none of his wily, seductive charisma so unmistakably on display in the wonderful 1980 film American Gigolo. There he also embodies a slick operator who outfoxes himself in a series of disastrous developments. Here Israeli director Joseph Cedar makes the most of his non-Jewish actors to subtly interrogate stereotypes. Michael Sheen plays Norman's nephew, Steve Buscemi a savvy rabbi, and Charlotte Gainsbourg an investigator. Each makes the character a complex individual while New York adds a strong location ambiance with the film's setting on the Upper West Side. Jun Miyake's music adds a lively commentary and Yaron Scharf's cinematography communicates undercurrents of the changing moods.

Norman: The Moderate Rise and Tragic Fall of a New York Fixer resonates intensely in today's climate of misrepresentation of facts and oneself. And yet. with his ability to spin almost anything, Norman risks becoming too annoying to remain appealing. Alternately, he may invite a fair amount of schadenfreude or just the simple pleasure of watching him becoming trapped in his own spider's web. In English and some Hebrew with English subtitles, at Landmark's Plaza Frontenac Cinema.