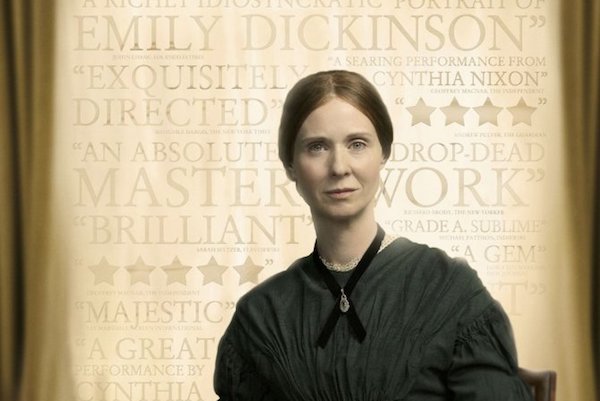 Anyone who knows anything about Emily Dickinson (1830-1886) knows she led a circumspect life. Her passions were banked, her circle small, and her relationships few. For years, she was often the only female in anthologies of American literature, and she still reigns supreme among her sisters and brothers in the canon.

Terence Davies brought "Sunset Song" to film with quiet passion. He manages to wring only dullness out of Dickinson's life with his script and direction. He begins at Mt. Holyoke where Dickinson flouted "acute evangelism" by refusing to be "come to God." Her sister Lavinia, her brother Austin, and her father Edward saved her from that. Her father agreed to let her write in the night, something no proper lady should desire or deliver.

This biopic traces Dickinson's life of writing alongside her dismay at her brother's infidelity and her grief at her father's death. She is seen wracked with coughs and pain and palsy until her death.

She is not seen as real, however, despite Cynthia Nixon's effort to render her in flesh and blood as an adult. Jennifer Ehle plays Vinnie with more passion, but Duncan Duff is almost risible as Austin. Keith Carradine plays Father with appropriate arrogance.

Davies chose to insinuate Nixon declaiming lines from Dickinson's poetry in voice-over at the oddest moments, sort of like ditties in a mediocre musical. At one point, she quotes "I Am Nobody" to her newborn nephew. Despite one radiant scene of Emily before sun-shined windows, there are stillborn pauses. None of these moments would bring anyone to appreciate Dickinson's passionate poetry.

Because I could not stop for this,  / the film limply streamed for me. / I admit to fast-forwarding, / because it ran an eternity.