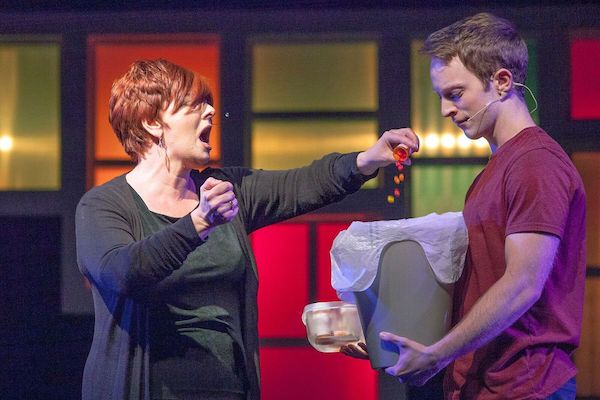 Insight Theatre Company kicks off its residence as part of the .Zack Arts Incubator with Next to Normal, the Tony and Pulitzer Prize winning show that takes a musical look at mental illness. The powerful show introduces us to Diana and Dan, a married couple with two children, Natalie and Gabe. The family is doing their best to maintain a sense of normalcy while dealing with Diana's increasingly persistent mental illness. The company and cast, under the direction of Edward Coffield, create a believable space in which the story unfolds, filled with fine acting and interpretation.

The show opens on just another morning in the family's kitchen, with everyone rushing around trying to get out the door on time. Diana's manic peanut-butter sandwich making is the first indication we get that everything is not quite as it appears. Multiple doctor visits and an arms' length list of prescriptions don't seem to help Diana, so a more radical treatment is suggested. All the while, son Gabe hovers over his mother, seemingly to protect and defend her and vying for his father's attention, while daughter Natalie retreats from the family dynamic and flirts with an addiction to purloined pills from her mother's abundant stash.

Debbie Lennon commands the stage as Diana, her presence and voice passionate and in perfect pitch no matter her emotional state. Lennon finds all of Diana's moments: normalcy, uncertainty, panicked mania, and immobilizing depression. She and director Edward Coffield find levels in Diana, ensuring that the character has depth and her illness, though simplified, is never minimized. Spencer Davis Milford is by turns sympathetic, conniving, and dangerous and son Gabe. Imminently likable, he's easy to cheer for and his voice delightful to hear. John Flack is ever patient and loving as Dan, and makes the most of his more limited range, while Libby Jasper is a fabulous counter to them all as the questioning, slightly rebellious Natalie. Max Bahneman and Ryan Scott Foizey complete the ensemble and provide interesting counterpoints to the family. Bahneman is a dogged and loyal boyfriend to Natalie, perhaps a reflection of a younger Dan. Foizey is convincingly Dr. Dimento, Dr. Feelgood, and a doctor we'd recognize as competent and caring, depending on Diana's mental state.

The set design by Robbie Ashurst, lighting design by Charlotte Wester, and technical design by Matt Stuckel add considerably to the tone, atmosphere, and storytelling. The almost unnoticed transitions in the color of light streaming through the set windows is a deft touch that adds much to the story. Laura Hanson's costumes, Ron McGowan's musical direction, and relatively simply but effective choreography by Trace Turner complete the story while adding texture and occasionally levity. The pieces come together quite well, resulting in an engaging and entertaining show that may nonetheless leave you deep in thought.

Next to Normal is told primarily through song and action and moves at a satisfying pace, still I feel like there's a little something missing. This may have more to do with the script than the finely wrought performances, for the directing and interpretation feels solid and consistent. The cast imbues their characters with a heightened sense of reality that often feels present when dealing with mental health issues, but there are moments when the show feels too affected, the real tension not quite present. Some of the scenes simply resolve too easily and the causes of Diana's mental illness are too focused on a single, traumatic incident, but the resulting fall out resonates with painful realism.

Mental illness is a difficult subject matter for a musical, its presence so pervasive as to feel like a character itself. With such subject matter and trajectory, it's hard to imagine the story moving anywhere positive. There are a number of scenes where hope seems completely lost, yet the story manages to maintain and end on an upbeat note. The performances are connected and delivered with clear and purposeful intention helping the audience wade through the rough waters, and the songs are at times quite moving and heartfelt. The beauty of Insight Theatre Company's Next to Normal, running through June 25, 2017, is succinctly conveyed through the title, and it's a place many of us may find familiar.