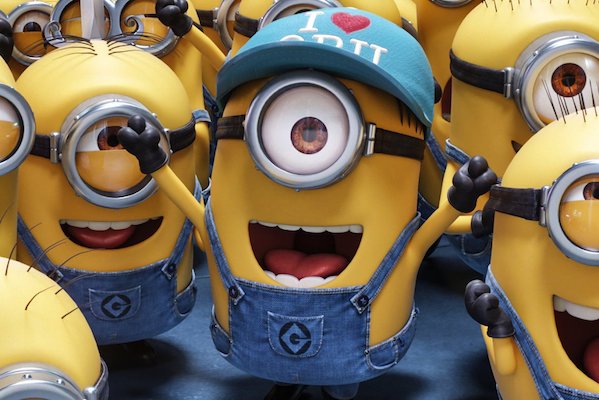 'Despicable Me 3' delights with cleverness

A lot of animated films have a sinking spell right about the middle, when the plot has been set up, the characters intro- or re-introduced, and the decibel level established but before the boffo end. Despicable Me 3 never sinks, which means: forget about taking a little nappy-wappy about mid-way.

The plot -- and there is one -- centers on former baddie Gru. He's been fired from the Anti-Villain League but lies about it to his family of darling daughters and to his minyan of minions. Then, surprise!, he discovers that he has a twin. Dru is cheerier and more despicable, and he ropes his twinnie into dastardly deeds. The biggest bad deed is going after the former child star Balthazar Bratt, stuck in the Eighties -- or maybe he just can't through the decades door due to his giant shoulder pads and pomaded hairs. Then there's the bubble gum.

Bratt, voiced by Trey Parker, behaves like a global brat, so Gru has to decide if he's going to go back on his declaration to his partner Lucy and his daughters that he will give up being despicable.

You know which side he's going to come down on. So you can sit back to watch what the film's creators have to show you in terms of cleverness under the direction of Pierre Coffin and Kyle Balda. Listen to the Minions sing "I Am the Model of a Modern Major General" in Minionese. Notice the tattoo of a giant banana on Mel's back. See them nude -- fans of the little golden boys know there's nothing -- nothing! -- cuter then yellow Minion bee-hinds!

There are also plenty of funny plays on words, written by Cinco Paul and Ken Daurio, such as a curse for the Eighties is "son of a Beta Max!" Steve Carrell voices Dru and Gru, Julie Andrews voices their mother, and Kristen Wiig returns as Lucy, making Despicable Me 3 thoroughly delightful, clever, and dear.