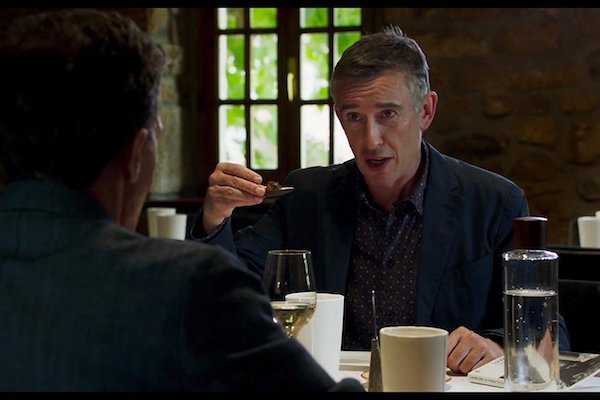 'The Trip to Spain' trips but doesn't fall

Bottom line: The Trip to Spain is not so good as The Trip or The Trip to Italy, but what do you expect? The comedy team of Steve Coogan and Rob Brydon does not appeal to everyone, but under Michael Winterbottom's direction, The Trip series also offers food and travel for your delectation.

The premise of the series is that Coogan and Brydon, originally defaulted into reviewing restaurants, now undertake the job. That they still know nothing about food and less about other languages does not keep them from spouting their knowledge like elephants drop pheromones.

Their conversational phallomachy pits each one to outdo the other in tidbits and toss-offs. They each have a wide repertory of imitations, some of the same men. "The Trip to Spain" includes the voices of Sean Connery, Quentin Crisp, and Mick Jagger in dynamics whose terracing depends on the ambient noise of this restaurant or their Range Rover.

Brydon leaves his wife and children (Charlie is so cute!) to accompany Coogan to Spain for a week. The film is sliced into days at appropriate times, including when they've outstayed their welcomes a skosh. Coogan expects to meet up with his son Joe at the end of the week's tour of restaurants. In between, both try to do their business with much Face-Timing and cell-phoning to agents and managers. Neither man worries about looking like a jackass, and that's what undergirds their dialogues and monologues and travelogues.

In between their patter, mostly improvised, there are spectacular aerial shots of the Spanish country side and close-ups of food being prepared in steamy kitchens across Spain. The Trip to Spain offers dry humor, word play, and adolescent behavior. My Dinner with André it's not, thank goodness.