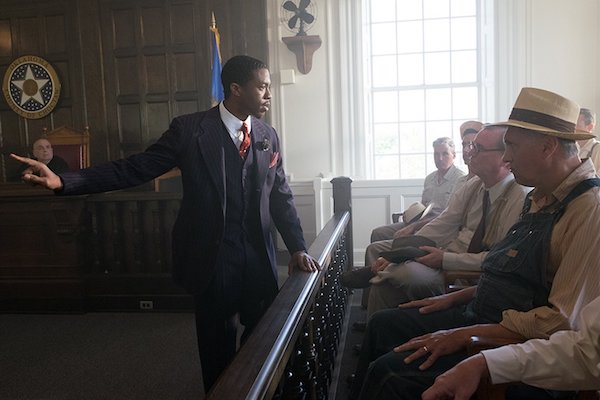 There's a new Marshall in town, but this marshall does not wear a shiny, pointed badge. He carries two suitcases, filled with his law library. He shleps from town to town, armed with intelligence, anger, forbearance, and cunning. This Marshall is Thurgood, and the year is 1941.

Long before Marshall became the first African-American justice of the Supreme Court, he was a lawyer for the National Association of Colored People. Correction: he was the lawyer for the NAACP.  In 1941, he was sent to Connecticut to defend Joseph Spell, a black man accused of raping and murdering a white woman.

Marshall cannot practice law in Connecticut: he is not enrolled in that state's bar. So another lawyer, one Sam Friedman, is shanghaied into sponsoring Marshall. Friedman is an insurance lawyer, highly protective of his budding reputation, and he's never met anyone like Thurgood Marshall. The tussle between those two, a Jew and a Negro, forms one of several foundations of this fine film.

The other foundations are the law, civil rights, racism, sexism, and class -- the very issues that concern not a few folks in America today. Those links between the past and the present may explain why Marshall seems to be so manipulative, in a muscular effort to finally get someone to heed history and do something about the future.

Chadwick Boseman, so praiseworthy in his role as Jackie Robinson in 42, carries off this powerhouse role as well, bending into the shadows in order to stand in the light in the end. He is foiled neatly and admirably by Josh Gad as Friedman. Dan Stevens, the weakest link in the cast, is outshone by Kate Hudson as the victim. Reginald Hudson directed the film with an agenda, but the flawed film works beyond that goal.