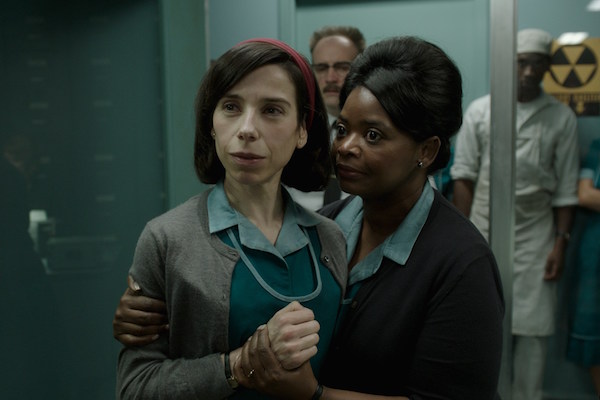 'The Shape of Water' enters a magical world of fantastic beauty

Writer/director Guillermo del Toro proved his inventive, impressive imagination with "Pan's Labyrinth" and "Cronos." Dodging unnecessary distractions, he taps right into primal fears and desires, embodying them in grand, elegant creatures as he again does in "The Shape of Water." The magical story begins in 1962 Baltimore in a U.S. government lab harboring an amphibian creature studied and tortured.

As the malevolent federal agent, Army Colonel Robert Strickland asserts, "The Soviets want this asset," thereby introducing Cold War metaphors and racial prejudice. The mute Elisa, who cleans the lab, intervenes when her interaction with the fairy tale beast develops into love and understanding to the strains of Benny Goodman and the joy of eggs. Along with her colleague Zelda and friend Giles, Elisa endeavors to free her soulmate.

For interviews at the Telluride Film Festival U.S. premiere, co-writer del Toro explained that he always enjoyed monster movies until the creature transformed into a handsome prince, as in "Beauty and the Beast." By contrast, del Toro presents a tale of the fantastic that transcends species identification, arguing implicitly for understanding and gentleness against whatever prejudices we harbor. The beast as beast is the beauty.

To sell this love story, Del Toro advised Sally Hawkins, who marvelously embodies Elisa, to borrow the famous Stan Laurel's gaze and the exquisite physical control of silent film geniuses Keaton, Chaplin, and Lloyd. She shines in an inspired performance as does Doug Jones as the beast from the Amazon. As the villain Strickland, Michael Shannon is unyielding and frightening, though more nuance could have added complexity. Octavia Spencer is wonderful as friend Zelda and Richard Jenkins offers a humane presence as Giles.

Nigel Churcher's art direction and Paul Austerberry's production design add to the impact. Del Toro directed them to use aquamarine, green and blue tones alternating with amber ambience. Cinematographer Dan Laustsen shoots with a frequently moving camera adding energy. Above all, del Toro convincingly pulls us into his world with water defining every scene, the most powerful element that like love, "takes the shape of the recipient," hence the title. Love has no single defined shape or restrictive dimension. "The Shape of Water" won the prestigious Venice Film Festival Golden Lion for Best Film and Best Soundtrack. Check local listings.