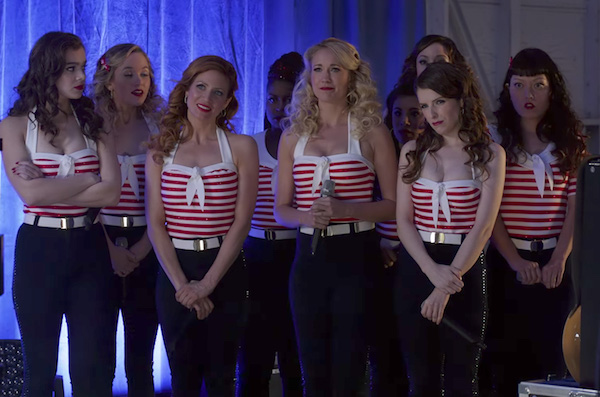 As for messes, "Pitch Perfect 3" is one, a mess o'fun. From start to finish, emphasis on "mess" more than "fun," however. And, yet, when looking for 93 minutes of brainlessness with a side order of the silly, the skinny, and the singing, you can't go wrong.

The members of the Bellas, a women's a cappella singing group, have aged out of many things after winning the national championship. Some are out of work, some quit, some have no hope. So when they are offered the chance at a reunion, they jump at it, only to discover that they were asked to be the audience for a new, younger group. As consolation, they accept the opportunity to sing for the USO with other groups with the greater possibility of being the opening act for DJ Khaled, played lazily by himself.

The women, most of whom are skinny as shivs, meet one of the other groups at a hangar in Spain. While touring, they engage in more than that, including a meeting between a daughter, Fat Amy, played as usual over the muffin top by Rebel Wilson, and her conman father, played oddly but with an Aussie accent by John Lithgow (perhaps he had a mortgage payment due?). By contrast, Aubrey's dad is a no-show, causing Anna Camp's smile to frown. Hailee Steinfeld plays the innocent Emily. Elizabeth Banks and John Michael Higgins are back as documentarians, commenting like a chorus.

Director Trish Sie offers some quickie edits of packing and touring and some interesting overhead shots; otherwise, she phones it in. Writers Kay Cannon, who worked on the first two Pitches in the franchise, and Mike White ("School of Rock") balance pathos with vulgarity and screeching. But, throughout, the script, these women refer to each other as "guys" or as "girls" when the abundant cleavage shown would deny those labels for these grown women.