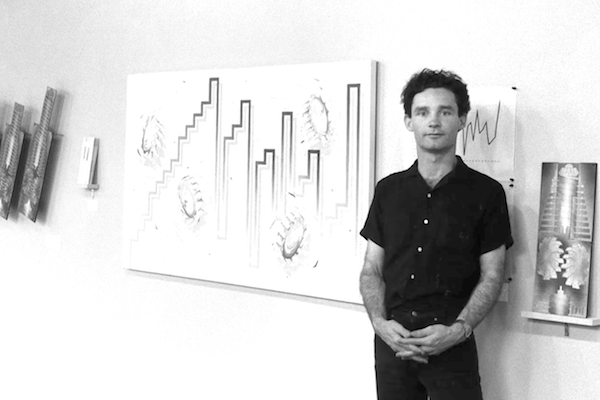 Director Oren Jacoby's "Shadowman" is a conventional documentary about an unconventional artist: Richard Hambleton. Born in Vancouver in 1952, Hambleton moved in the late 1970s to New York where this biographical survey begins with dramatic black and white images. It's now 1981, the Lower East Side, as the camera spies a mysterious figure spray painting a shadowman on a wall.

In a quick 81 minutes, we learn that this surreptitious artist painted the Image Mass Murder series across the U.S., outlines of imaginary victims' bodies on which Hambleton splashed red paint simulating homicide scenes. Credited next as a pioneer of street art along with Jean-Michel Basquait and Keith Haring, Hambleton initially became more successful than either of them, as recounted by interviews with art dealers, art collectors, critics and acquaintances, including Mette Madsen his past, long-time girlfriend. And then he disappeared for two decades.

When he resurfaced, as he does several times, Hambleton is a drug addict in free fall, indulging in massive amounts of ecstasy, crack, heroin, living in a "junkie house" captured in home movies. And yet his marvelous creations are, as described in "Shadowman," experienced "as an action, not an image." Obsessively painting, Richard next produces huge landscapes and seascapes. For his work, even one-man shows, Hambleton receives and always squanders large sums of money. He is befriended several times and, just as often, self-destructs and alienates those who try to help, refusing to release promised work, angry, destroying great paintings.

Interspersed throughout the film, most astonishing of all is footage of Hambleton himself through the years, looking crazed, ill, nearly fading into the ghost silhouette for which he's famous. Director Jacoby doesn't pull his punches in this honest, painful profile. Most such documentaries heap on the praise of the genius artist subject. Here Hambleton emerges as a truly infuriating, albeit brilliant artist.

"Shadowman" screens at Webster University's Winifred Moore auditorium Friday, January 12 through Sunday, January 14 at 7:30 each night. For more information, you may call 314-968-7487 or on the web at: Webster.edu/filmseries.