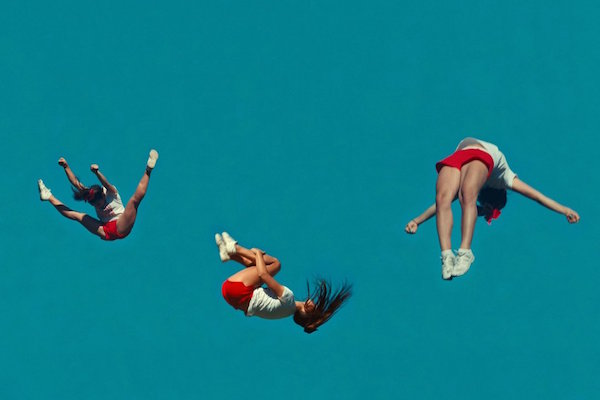 Norwegian director Joachim Trier tackles his first English-language film in Louder Than Bombs. Here, the title refers to the impact of war photojournalist Isabelle Reed who has committed suicide in a purposeful automobile accident three years before the present day story begins. Set in a small town in New York state, it focuses on three men in one family.

Each of the principal characters -- Isabelle's now widowed husband Gene, their older adult son Jonah, and younger teenage son Conrad -- still grapple, understandably, with the lingering effects of her death, though Conrad doesn't know it was a suicide. A review of a retrospective exhibit of Isabelle's work will make this public. Meantime, Gene struggles to connect with Conrad, pestering him with phone calls and following him. Conrad escapes into video games and fantasies, including his crush on a cheerleader.

Jonah and his wife have just had a baby girl, which doesn't stop him from reuniting with a former girlfriend. Each character has his secrets and lies, offering a potentially rich interrogation of values and character. But to raise these men to a level of interest, writers Trier with Eskil Vogt needed to dig beneath the surface into complex emotional hurdles. On this they too often fail, primarily because the women are underwritten. Hannah, Gene's lover and Conrad's English teacher, is nothing more than a plot point, underdeveloped when the story should explore her and Gene's relationship. The same applies to Jonah and, to a lesser extent, to Conrad.
Isabelle's award-winning war photography stands out but feels gratuitous and, therefore, offensive.

Louder Than Bombs is one of those increasingly common, frustrating films that has great promise, some insightful, even poignant scenes, but that doesn't quite click. Some challenges come from the non-chronological story with Isabelle worked in as memories arise in brief scenes. In that role as Isabelle Reed, Isabelle Huppert suggests weary disenchantment through her distressed eyes and face and, ironically, the film is most alive when she's on screen.

As Gene, Gabriel Byrne conveys his perplexed state in a mildly sympathetic way. Jesse Eisenberg gives Jonah a deceitful aura without ever being totally convincing, while Devin Druid as Conrad is the most authentic character, alienated with barely suppressed anger. Louder Than Bombs slowly and methodically struggles to express profound but elusive truths about grief and loss. It provides the occasion for consideration of monumental issues, but it relies on the viewer to provide most of the substance. At the Hi-Pointe Backlot Cinema through Thursday, May 12.