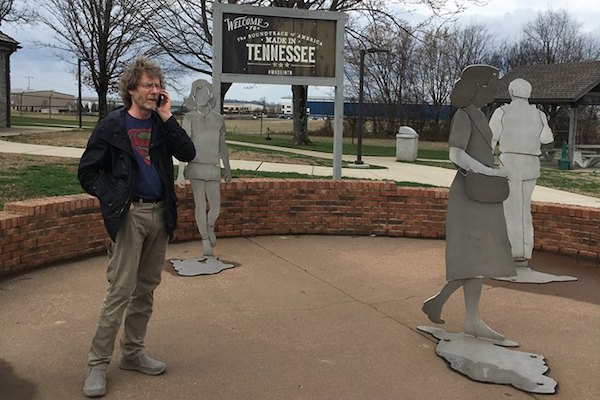 Mandolinist extraordinaire and #1 Cardinals fan Sam Bush has been bringing his band to town since 2000, delighting St. Louis audiences with his genre-bending mashup of bluegrass, jazz, rock, reggae, and whatever-the-hell-else-he-feels-like-playing. Sam recently spoke with Keith Dudding on Down Yonder about the current lineup of the Sam Bush Band and about bringing old songs out of the New Grass Revival catalog.

Sam Bush: Yes, yes. Loved Hartford. I just did an interview the other day concerning a book about Hartford. Where these people have been through a whole bunch of manuscripts, because John got to be ravenous about writing within the written page, as he learned to read music and write fiddle tunes. And I'll be doggone if a friend came up the other day, they'd gone through a lot of his notebooks and found where in 1983, he wrote a tune called "Sammy's Bush,” so I have the sheet music for it. I haven't learned it yet. So I've got to learn this tune. So pretty neat. Pretty neat to find that many years later.

KD: That is pretty neat. When you come to town, you always will throw a Hartford tune into the set and we certainly appreciate that.

KD: But is there a special St. Louis connection for you?

SB: Yes. Growing up a Cardinal fan is part of why I love St. Louis, but long ago in the early ‘70s, we met a fellow at Bean Blossom Festival named Ed Drone, a bluegrass musician from St. Louis and we started getting to come there and jam here and there. So it's a gateway to the west. What can I say?

KD: Let's talk about the band. Because there's been ... you've had wonderful consistency, but there's also been turnover. You are the only original member of the Sam Bush band.

SB: (Laughs) I guess I am. Yeah. Boy. And I haven't been fired yet, so I've got that going for me. Although they've had grounds a few times to fire me in my own band. But, you know, last year was a fun year, in that Scott Vestal, our wonderful banjo player won the Steve Martin banjo award. Of course, there's no one more deserving and I'm just really thrilled for him. And in that particular instance, you are, that is from your peers. That is voted on by other banjo players. So I'm just so proud of Scott. And of course, those that hear him play, he's so smooth and effortless.

SB: I’ve never seen a prettier pair of hands than he has. They're so graceful. And it's as if they're not even lifting off of the strings. And of course, Stephen Mougin, I think he's, maybe he's the right hand man over there, our guitar man. You know, he's doing well. He's got his own record label called Dark Shadow. Becky Buller is on his label. So that's going well for him. And then we've got Todd and Chris on bass and drums. And of course, man! It's so nice to be playing when you've got this great rhythm going on. And that's one thing I take pride in our band, is that we, our rhythm playing together. All five of us can sure get on the same wavelength quickly. And that's ... timing is everything to me. So there you go.

KD: How much material does the Same Bush band have stage ready, shall we say, at any given time? I know things rotate in and out of the setlist.

SB: Probably about three sets worth. And if anything, in this year, it's kind of like, I want to try to shake things up from night to night a little bit more this year than ... sometimes I get comfortable. And we love playing certain tunes, you get tight on and everything.

I think this year we’re going to try to shake it up, to the point where sometimes for instance, just recently. We were at soundcheck and all of a sudden the news came to us that Fats Domino passed away. You know. Like, wow. Aww. And all of sudden, Scott just went into the JD Crowe kickoff, "I'm walking".

SB: As JD Crowe's band did. And that night, we played the JD Crowe version of "I'm walking.” And it's just fun to be able to throw in that. Of course, our band, we've got such a variety of musical styles within the group, that we can draw on different influences per night. So I think we'll probably be throwing in a few different things this year.

KD: Well, I mean you've got a deep catalog. And of course, you want to do a mix of, you know, here's the new stuff we're doing, here's some favorites of yours. And once in a while, it seems like every concert, you pull out some chestnut from the old New Grass songbook.

SB: Oh, my wife Lynn has often said, "You know, you should throw in more New Grass tunes, because who else should do them?" We actually just, in a recent rehearsal, worked up a couple off our very first album.

SB: We haven't done those for years. And it's interesting to, for instance, the difference between the way New Grass Revival did “Ginseng Sullivan” as opposed to, like five, what, six, seven years later, I recorded it with Tony Rice.

Different tempo, different chords. Tony changed it somewhat. And so the Revival, we kind of did ... we do the original chords like Normal Blake wrote, and in the tempo Blank did it.

SB: And it was just a little slower. So it's fun revisiting these old songs.