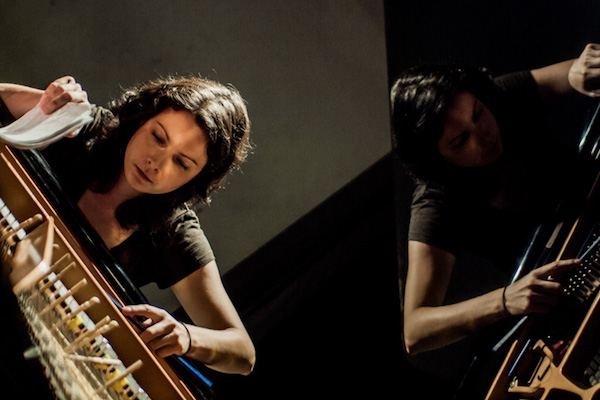 Art of the Duo: An Interview with Kris Davis

The New Music Circle will begin its 58th season with the piano duo of Craig Taborn and Kris Davis who set out on a tour to mark the release of her album Duopoly, on which she plays with a number of luminaries including Bill Frissell, Tim Berne, and Don Byron as well as Taborn. Kris Davis spoke to KDHX from her NYC studio, before embarking on the two-week twelve-city journey. Kris Davis and Craig Taborn will play the 560 Music Center in University City this Saturday, October 1.

JK: How long has this tour as a piano duo been planned for? Did the idea to tour come after Duopoly?

KD: The idea to tour pretty  much came right after recording the pieces -- I'd say within five minutes of playing (laughs), Craig and I were like "This is great!" and our producer, David Breskin [who is producing the Taborn / Davis two week US tour] also really loved the duo, so he wanted to create an opportunity for the two of us to play again. So it's been in the works since the recording, which has been a year and half now.

JK: Can you tell me more about writing material for the new album?

KD: I was trying to think of a different approach, trying to find a different sort of project that wasn't group based. Usually I'm trying to put together material to be played by many musicians and tour with a full group, which can be really difficult to put together, so i wanted to try doing something that would capture the moment of the first meetings I experience when playing with people -- which can be risky business because you don't know how it's going to turn out, but it turned out great. I tried to come up with pieces that were appropriate for everyone, that made them more comfortable and would help bring out their voices. We gave everyone three hours, some of which were really easy and some we had to figure out how to make it work for the duo format, usually by bringing in compositions that I have not yet played and trying to figure out how those could translate into the duo.

JK: And what about the piece you and Craig Taborn did together ?

KD: The piece for Craig was really composed and detailed, but once we got in the studio and started working on it, we ended up just improvising off the concept of the piece. So it turned better out much more improvisational that what it was written, which originally was pages and pages of  rhythmic interplay with heavy intervallic lines. So we took the spirit of that and improvised upon it, and it turned out for the better.

JK: What are the similarities or contrasts of your and Craig Taborn's playing?

KD: I think we have similar approaches actually, and honestly Craig has been such a big influence on me -- in terms as both an improviser and composer he's certainly one of my favorite pianists. So it's been a real honor and amazing experience to play with him. I'm just looking forward to learning from him over these next two weeks during the tour. We both certainly have our own styles, but I think the nuances of our individual approach are pretty subtle. We certainly draw from many of the same influences and musical  inspirations.

JK: What will the live material consist of on tour? Compositions or spontaneous material?

KD: We are riffing on the idea of having compositions and then opening them up, which is something I do with my groups quite a bit anyways. But on the recording it opened up even more than I thought it might -- so for live material we thought that having compositions to work with, and improvising between them, makes for a nice landing spot, and not feel like you have to come up with all the material right in the moment all the time...

Note: Jeremy Kannapell is program coordinator and publicity at the NMC.