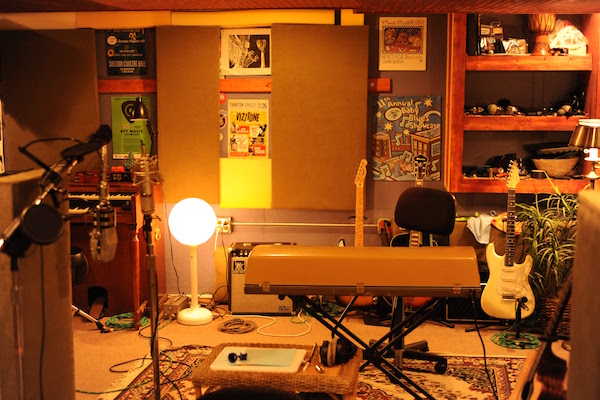 Paul Niehaus hears things in his head and St. Louis is about to hear them too because this year's St. Louis Blues Society Compilation album, 16 in '16, has just been released. It builds upon the success of last year's 15 in '15 which topped the list of KDHX's "Top of the Spins for 2016."

16 in '16 brings together yet another group of St. Louis musicians performing all original music. The producer and St. Louis Blues Society board member, Paul Niehaus, has been invaluable to this process volunteering his time and his Blue Lotus Studios to create the project.

Paul was a horn player in school but after hearing BB King's "Live at the Regal" at the age of 14 he bought a guitar and began playing. Then he began adding instruments -- bass, keyboards and percussion -- as he began performing with local bands. A 2009 music degree from Truman State followed and he returned home to "practice music as a professional freelancer." He has toured with several blues bands and now is considered one of the most desirable sidemen in town.

While Paul has a passion for playing music it's his audiophile instincts for the quality of the sound that got him into the studio. He says it was the "sounds in his head that got to him": "I'd go to shows and hear how the soundboards and live mixes all too often didn't sound that good. I was obsessed and I would dissect what I would do to it." It all added up to one cognitive experience that "the better you manage all those little parts of it the more awesome the end result."

Paul's sound obsession became a craft as he upped his knowledge, skills and recording equipment. It was formalized with the creation of Blue Lotus Studios in in 2015. He chose the name because "in Indian spirituality the lotus represents this beautiful plant that rises from murky muddy water." He describes sound engineering much the same way; "sometimes an artist comes in with a song and within it there is the statue. But it's like a massive block of marble that needs chipping away at steadily revealing this awesome structure that's underneath it."

Sometimes there isn't even a block of marble. Soul singer Gene Jackson's 16 in '16 song, "Ain't No Way," was just a melody in his head. He came to the studio and hummed it for Paul. "Then Paul picked up a bass and started playing and then added a guitar and some organ. I went home with the music and wrote the lyrics. Then strings were to create this sort of Irish soul sound," explains Gene. It worked so well they are now making an album together for a spring release.

The other side of the production business is people skills. "Every time you get musicians together it is a combination of sum factor of all their personalities, their feeling that day, their moods -- artists are complex eccentric people, myself included. It's all about getting them comfortable and stimulated for a good take and I'm still learning," said Niehaus.

The production of 16 in '16 began over four months ago with conversations between Paul and Jeremy Segel-Moss (Chairman of the STLBS) about potential bands to invite. Each band has the freedom to choose how they want to be represented on the album but it must be original music. The primary goal is to produce a stylistically diverse well-rounded album and Paul feels they have. "If the Blues were an octopus, we got all eight arms represented," says Neihaus.

16 in '16 showcases the talent, energy and momentum in the St. Louis blues community. People like boogie piano man extraordinaire, Ethan Leinwand, moved here to be part of it. The story's the same with our highly regarded Texas transplant, John McVey. McVey describes his up tempo swing boogie cut, "She's My Girl Now," as "sort of a garage band blues rockabilly." He moved to St. Louis because "there are more good blues in this area than the entire state of Texas, and you can reach half of the country in a day trip. In Texas we considered a 17 hour drive a day trip. No more of that for me." Ethan and John have become part of a "self-amplifying feedback loop," as Paul put it, "They love it here and want to be a part of it and make it better."

Those tentacles keep coming with younger musicians like vocalist Emily Richard and pianist/arranger Chase Garrett of Sweetie and the Toothaches with their song "Bigger Fool." Emily says she and Chase "are energetic happy people so jump blues fits our style." The song is personal. "You gotta go through the bad to write good blues," Emily says. Chase, another recent transplant and friend of Ethan Leinwand's also moved to St. Louis "because this is a piano blues city." Another up tempo contribution comes from Little Rachel with "Time Flies in The Friendly Skies." Paul says it is simply "2:42 minutes of dynamite of rockabilly energy."

Leroy Pierson and Tom Hall keep it authentic with their resonator guitars. Leroy's cut, "Easy Rider," also features Curtis Buckhannon on mandolin. They have played it together many times over the last 45 years. Leroy explains that "the tune is basically traditional blues with Lightnin' Hopkins and Henry Townsend influences . . . but if I listen closely I could probably find ten different influences in this song." Tom says his cut "Texas Twister Blues" draws from "a bit of North Carolina Piedmont blues and my own licks with Blind Boy Fuller and Rev. Gary Davis influencing the tune."

Traditional and urban blues, soul and R&B are also on board. Beulah Foehner, daughter of local musicians -- Sharon and Doug Foehner -- makes her vocal debut on her mother's song "Homeless Child." A straight up blues song she wrote "after seeing a photojournalist report about children living in homeless shelters." Skeet Rodgers & The Inner City Band, the urban blues specialists, weigh in with a slow tune, "I Wonder." David Dee's "Bit by The Blues," takes on a Memphis Stax-y kind of R&B blues ambiance that pairs well with Gene Jackson's soul groove.

Tyler Stokes and the Delta Sol Revival stir up the 16 in '16 musical gumbo with "I'd Rather." He says he wrote "a blues-centric song in a way that fits with their Latin/New Orleans/ Rhumba style." The Maness Brothers, a guitar and drums duo, bring a bluesy rock style with "Drive Me (And My Soul)" that is reminiscent of the Black Keys. Tommy Halloran takes us on a jazzy/folksy Americana blues ride with "Sleepin' Dog" that features Eric McSpadden on the harmonica and some killer harmonies from Kari Liston and Leslie Sanazaro. Bob Case, who used to tour with JD Hutto and others offers up "Sometimes It Feels (Like the Whole World's Gone Crazy)" which has an early electrified Bob Dylan flavor to it.

Marty Spikener brings a couple of grooves. One is "to keep the blues scene thriving" which he does as a St. Louis Blues Society board member and by working with kids through "Blues in the Schools" program. The other groove is with his On Call Band that brings a Texas shuffle/backward beat style to the compilation with "Crawling Back." Paul calls it a "quintessential textbook cool blues with some funny lyrics in it." Marty laughs and says, "Paul also calls it a flat tire groove." Paul Bonn & The Bluesmen are also shuffling with "Stop the Killing" that brings an electric low down blues style featuring Jon Erblich on harmonica.

Tom "Papa" Ray brings it all home with a poignant St. Louis story, "Saint Louis Gunshot Blues." He said he wouldn't write songs for a long time but when asked this time he said, "I thought it was time for a proper weather report about our city." Tom says he "wants to do blues for the 21st century" and this styling is "somewhere between Slim Harpo and Gil Scott Heron."

What a way to start the year. The St. Louis Blues Society 16 in '16 has it all: octopus tentacles, gumbo, weather reports, and some great St. Louis sounds that will get stuck in your head.

This article was originally published in the January issue of the St. Louis Blues Society's monthly BluesLetter. To see more photos of Paul Niehaus' Blue Lotus Studios, click the image below. 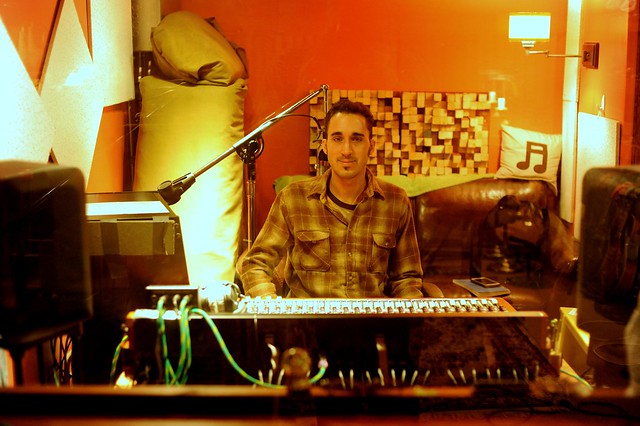