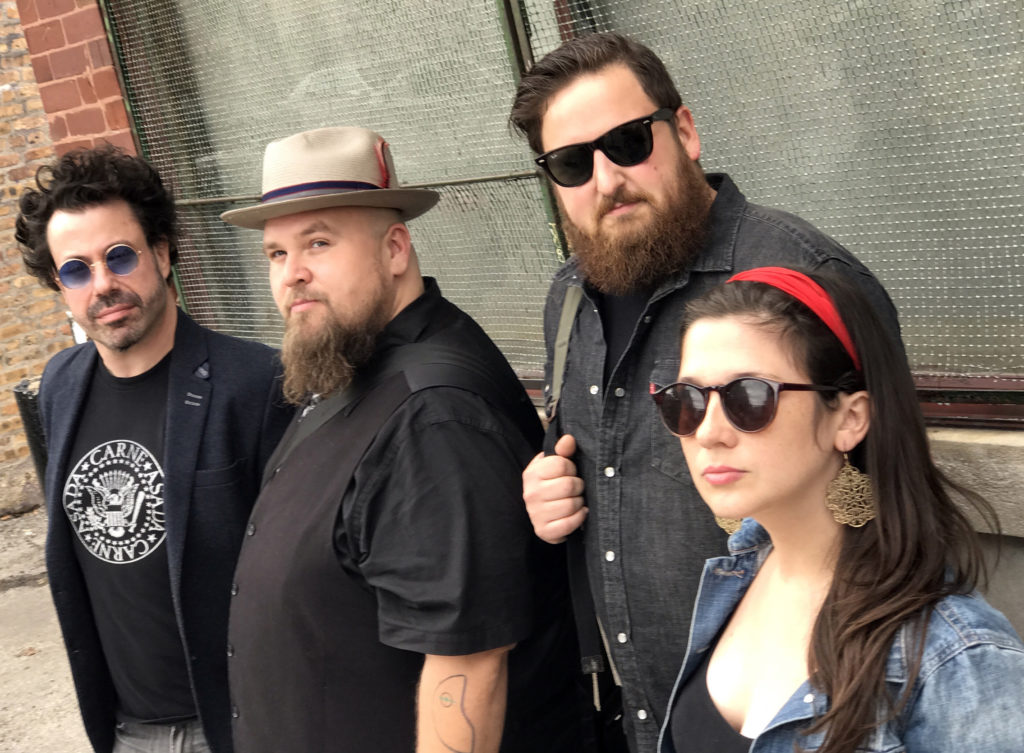 Gonzo blues on the move: An Interview with Johnny Iguana of The Claudettes

East Side Slim of Rhythm Highways had a chance to talk to Johnny Iguana of The Claudettes about recording their new unplugged EP 'Pull Closer to Me: Live in the Piano Room' and the expanded lineup in advance of the live full-band electric blues show at Off Broadway on Thursday, March 16.

East Side: You've had a three piece with The Claudettes before, two piece, three piece, kind of varied, and now you've expanded to a four piece.

Johnny Iguana: Yeah, we're going to limit it at four. Anything beyond four is just outright insanity, right? I mean we don't want to go to those kind of extreme lengths, but we started out as a duo -- piano and drums--and then added a singer and that made us a trio. We've continued to expand, we've got an additional singer who plays bass, so we've got piano, drums, bass, and vocals, but it's still really piano-forward. It's amazing how a band doubles in size when you not only have vocals but two vocalists singing in harmony all the way through. It just really, really expands things. I'm lucky to have two great singers whose voices blend so beautifully, and even though I'm kind of territorial about the bass lines -- playing them on piano -- Zach [Verdoorn] is such a great musician. He plays some guitar and some bass but when he plays bass he's not always doing the bass line. He might be doing a texture or figure along with what I'm doing, so it's wild! Those live sets are part instrumental part vocal songs and have kind of a Minutemen style of just pounding in sixty songs into a night or however much time we're allotted. All our songs are in the two- to three-minute range and there's no gratuitous solos all over the place. There are solos, but we kind of hit it and quit it with every song, flying fast and furious -- I think that pace makes for a really fun show.

ES: You mentioned the problem of a bass player riding over the piano player's lines and that was one of the very first things I thought when I heard the news, "They added a bass player? Oh man, they really don't need a bass player with your left hand going all the time," but once I saw the live performance, it works so very well.

JI: Yeah, Zach is also a really fine singer. I'm really, expressly, trying to write some songs for him now because when you have multiple singers -- it just keeps things moving, keeps things interesting, to mix up who's delivering the vocals, especially with different stories to tell.

ES: Could you go through the lineup?

JI: So Berit Ulseth is the other singer, and then Matt Torre is the drummer, and I'd also played with Matt in Chicago, he's from the Detroit area. Matt was actually the one that introduced me to Berit, who's just such a beautiful singer. She's from Minnesota and has been in Chicago for years. So none of us are from Chicago, we all met here. That's one of the great things about the city is you just meet musicians and people from all over the place; you get its own kind of melting pot.

ES: I was fortunate enough to catch this version of The Claudettes at a house concert here in St. Louis not too long ago.

ES: Yeah, and Berit's voice is just mesmerizing. She just kind of closes her eyes and it's like she's going someplace else and the guys are still all doing their thing around her. Hey, I know you've got a new album in the works coming up a little later this year. Care to talk about that with a little bit?

JI: Actually, our drummer Matt was the one who urged me to spend our winter filming some videos. He said, "Let's do some kind of acoustic videos right around your piano," because we had this one show we did in Connecticut at a festival where they lost power, and it was in an old field house and there was an acoustic piano, just an old upright against the wall, so we left the stage and went over there and played the last 40 minutes of our set with tambourine, singing and piano. The reaction we got was just so rapturous. It was more so I think than even when we'd been plugged in. Matt was saying, "How many bands that really just churn out the electric sounds can also just do a whole set around a piano, and one that sounds so good and gets such a great reaction?" So we decided to do a video series of acoustic, unplugged performances and we filmed them and posted them, then our label Yellow Dog Records -- who put out our first two albums -- asked if they could put out the audio as an EP introduction to the four-piece Claudettes, to cast a spotlight on the softer side, the intimate side. It even makes me think of old '50s and '60s records, like we should title it "The Other Side of The Claudettes."

JI: Because the album that we have coming in the fall was produced by Black Keys producer Mark Neill who had gotten ahold of me, who had gotten hip to the band and really liked the piano approach to the band and wanted to record us -- so we went down to his studio in Georgia and recorded a really pretty crazy, really great, wild ride of an album that's going to be out later this year, kind of in anticipation of that electric album we have this acoustic EP that is up on the Yellow Dog Records website right now. It's seven songs, it's some of our own songs, kind of previews from the forthcoming album and all, our takes on some soul and pop and other songs that are on there.

ES: And I would say there are a couple surprises on there. I've listened to it several times over and am enjoying it very, very much. Now those new, live videos, are those going to be the only songs that are on the new album? Or will it also mix in some of your older material?

JI: There's a few covers on there too, a couple songs you've probably seen us do live. There's a Leslie Gore song and there's The Ikettes' debut "I'm Blue," and the version that we did was more like the Shangri-Las, which is really fun to do live. So those two, but otherwise it's all songs from the next album. Also a couple of them that we're going to post last are our instrumentals from our first two albums that now have been expanded to have bass guitar; they were recorded with just piano and drums. Kind of wild gonzo-blues piano drum songs.

ES: That's a pretty good description right there, and actually that was going to be the next direction I was going to go. I was going to ask you how you describe your sound on the new album and I say that because some of the material that your publicist gave to me, there's several pages, there's one page that's just all quotes and one that really struck me was from Eden Brent who said it has "all the sophistication of twenty-first century serious music with a hell of a sense of humor, most interesting piano album in my collection since Brubeck's Take 5," and that's coming from a person who is a heck of a piano player herself.

JI: I was thoroughly charmed by that.

ES: Yeah! That's pretty cool, and the fact that Mark Neill sought you out, right? Is that correct?

JI: Yeah, which was quite amazing because we were looking for a producer that we thought might bring other artistic flavors to the songs that we had written. It was really quite amazing that while I was contacting some other producers, Mark contacted me separately in an unrelated fashion. It was amazing timing because that was just exactly what we wanted to do was to ally with someone who was going to have their own outlook and their own take on the sound. And in fact, it was not all peaches and cream recording. When you have someone like Mark that's such a strong personality with strong principals of recording as well as arrangements -- he was unyielding in some ways and it made us squeeze out something that could please all of the above. It was quite a process.

ES: Yeah, I know from the description and the notes that I have. I wished there would have been a picture of him because your description of the man was pretty entertaining, so I am so looking forward to hearing this new album. You all doing your thing working with him and the combination of making something even greater than the sum of the already very, very nice parts.

JI: I should quickly read you the quote that Mark Neill sent me about the album. He wrote: "Haunted cabaret, David Lynch movie-music crossed with Allen Toussaint's driving piano sound. And sort of like when you're driving late at night in the South and two radio stations are coming in together and it's perfect. Like Otis Spann and Mark Sandman from Morphine sitting in with Keely Smith. I'm kind of riffing here but seriously nobody sounds like them, I love this new record, it's crazy good."

ES: I'm glad you read that because that struck me as well, I did want to touch on that. It kind of got lost in my mind here but I'm really glad you mentioned that one; that is so good, and it's apt and it's perfect. That is a very good description of The Claudettes sound right now.

JI: It's indicative of the sort of doom we're in because you're supposed to be one thing. That's what the music business is all about. Unfortunately for us we're real living, breathing, flexing human beings with lots of interests and passions and it all comes out as this new thing, and yet to me I think we have one sound and I think it's rooted in American roots and blues music, but it's certainly not slavish to the past or dead on arrival like so much of blues and roots music sometimes is when people are too timid to let their own personalities and eccentricities lead the way.

The Claudettes will be performing at Off Broadway on Thursday, March 16 with Tortuga opening.