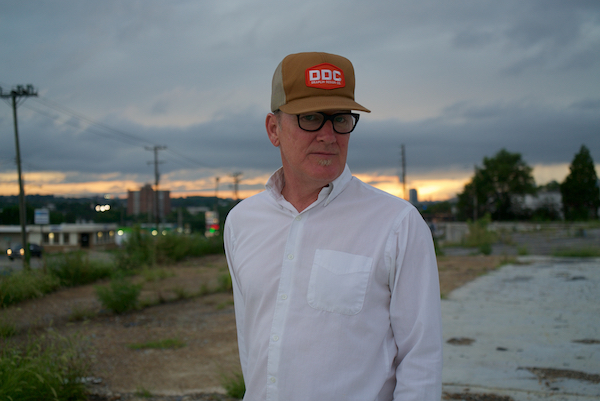 'Making Joyful Noise Together': An Interview with Kurt Wagner of Lambchop

Lambchop is an enigma. It's a band that fits the definition of "cult favorite" as well as any, despite the fact that past and present label-mates on Merge Records define a large portion of the indie-rock canon -- Neutral Milk Hotel, Arcade Fire, Spoon, to name just a few. They've been around longer than any of these bands, and may outlast them as well.

Lambchop released its first record in 1994, and has maintained a consistent, shape-shifting output in the two-plus decades since. Initially shoved beneath the alt-country banner (they're genre-bending, with Americana touchpoints) they've shed that label over time and more properly defy classification. This is especially true of the band's latest release, FLOTUS, which centers the band's poetic, lounge-style sound around electronic elements for the first time.

Kurt Wagner is the center of Lambchop, guiding the group into uncharted territory as both bandleader and bard. And it was his experience with HeCTA -- an electronic/dance collaboration with fellow Lambchop members Ryan Norris and Scott Martin -- that foreshadowed Lambchop's most recent change of course.

In addition to the release of FLOTUS in 2016, Lambchop reissued its 2002 LP Is A Woman earlier this year. It's a still, observational record, built atop guitar and piano. Sitting next to the lightly pulsing, comparatively experimental FLOTUS, the reissue reminds us how deep and far Lambchop has voyaged over the past 15 years. I talked with Wagner on the phone from his home in Nashville, Tenn. The band kicks off a rare string of U.S. dates at Off Broadway on March 22.

CB: Lambchop's records tend to not take into consideration how the songs might be played live, so how do you go about taking something like FLOTUS and presenting it on-stage?

KW: Well, the interesting thing about FLOTUS, that we sort of discovered when we started thinking about performing it live, is that it's a pretty open-sounding record. It's a little sparse in a way, so it lends itself to a smaller presentation in terms of number of people. We're traveling with Andy Stack who's in Wye Oak, and he's a multi-tasking sort of musician, so he covers a lot of territory that helps fill it in. The rest of it is a trio of bass, piano, and myself.

CB: The instrumentation and arrangements on FLOTUS differ quite a bit from most of the Lambchop catalog. How do those songs feel when they sit alongside some of your older stuff?

KW: That's kind of the cool thing. Because of the openness of the presentation that we're doing, we'v found certain songs really work well in that way. In some ways, it's sort of taking the older songs and presenting them a little differently. I find that they actually work pretty well together. We're anxious to present as much of the new material as possible, but we have quite a bit of stuff. So, you know, we've found some things that seem to work really well. We've done 44 shows now with this setup, and it's really fun, it's really cool. I'm excited to do it in the U.S.

CB: Between FLOTUS and Mr. M you put out the first album by the HeCTA project. It seems like there was some bleed from that project into FLOTUS. Can make that connection a little bit more explicit for us?

KW: Mainly it was technological, learning the technology that was involved in the HeCTA project opened up a new way for me to write. I was learning about different software programs, and of course, in performing with HeCTA live, I learned about processing my vocal in a live way. Once that came about, I was able to apply that particular tool to the writing that I was doing. HeCTA is definitely a different type of thing, a thing where we wrote these songs together as 3 different artists coming together and bringing their [ideas] together. Lambchop is pretty much me sitting around coming up with the songs and then presenting them to the band. So I sort of found a new way of writing, and through that comes a new sound. But it's still Lampchop.

I used to just write singing and playing guitar onto a tape recorder, a cheap little dictaphone tape recorder. And once I started using these software programs and was able to edit and create stuff independently, then I was able to realize the songs a little bit fuller, and introduce a different way of presenting it to [the band]. It's still like, "Here's the song," but it's more realized, it has a fuller structure. The way I wrote most of FLOTUS was literally without a guitar at all. I just used a voice and computer software, and that was it, and I've never done that before. It was exciting; suddenly I'm not limited and constrained by my limited abilities as a guitar player. I can do whatever I can think of. Whatever comes out of my mouth, I can turn that into the sound of an organ, or something. It really freed me up to try different songs and structures and keys. I would never come up with the stuff on FLOTUS had I kept working the way I was doing. That's exciting and liberating.

CB: The new record and the shift in instrumentation and songwriting kind of begs the question of genre and how it relates to your band. What is Lambchop's relation to genre? Do you think the band seeks more to destroy it, or to ignore it?

KW: (Laughs) We just kind of go about our business. Unfortunately, I guess genre comes into play. People like yourself have to tell somebody what this music sounds like. In our case, I don't know, we just do what we do and it never seems to really fit any particular genre in a proper fashion. I don't think that's such a bad thing, it just makes for awkward conversation sometimes. If that means that we're sort of doing something unique...

CB: I was interviewing another musician recently and they were saying that they didn't think that 20 or 30 years ago people talked as much about genre as much as they do now, that somehow...

KW: (Laughs) Well, there were fewer genres. There was, like, rock and roll...

CB: ...but I think that, taking that idea a little bit further, if you go back to Lampchop 23 years ago, or whatever it's been, the music industry as a whole has changed a lot since then. It's been turned upside down. But from my perspective -- from the music-fan perspective -- it doesn't look like what you do, or the way you do it, have changed that much over that time.

KW: You know, it's probably true. We just plot alone in our own way. We just go about things in the way we always have. It's a fairly straightforward thing where we have remained independent of a lot of things. Obviously, we've worked with the same record label that we've worked with for over 20 years. We're just our own thing. We decide when to make a record, we pay for the record, we present it to the label: "Here you go!" We've sort of remained autonomous all these years. There are certain bands that function like that, but not many.

CB: I wanted to ask you specifically about the reissue of Is A Woman. What was it about that record that made it feel like it was worth revisiting?

KW: From the U.S. perspective, the big thing was it was never available on vinyl in this country. As a record in general, it was the record that followed up Nixon. Nixon was much more a record that was popular in the U.K. Is A Woman ended up being the one that was very popular across Europe. When you put that together, that solidified our world in Europe in general.

For me, it was a big record because started to create a sound that continues in some aspect to this day. Prior to that we were still sort of exploring how far we could go with the record-making, and how to make a record that was as technically and sonically as great as any big commercial release, and do it with a humble budget and facilities in Nashville. Is A Woman was really digging in and focusing on songs. It was also the introduction of the sound of piano in what we do. When Tony [Crow] joined the band, I pretty much designed the record around him, to feature the sound of piano, because it was something that had been rolling around my head for years. It was just that nobody in the band had played piano.

CB: As I was doing some research for this conversation, I read the Wikipedia article for Is A Woman. In the first sentence, it referenced "minimal instrumentation" but then included in the credits 19 musicians. I felt like that was Lambchop in a nutshell.

KW: It kind of was. It really sort of took, what at that point what had been a wonderful expression of a lot of people getting together and making a joyful noise together, and Is A Woman took the whole thing and made it coalesce into something that was pretty special.