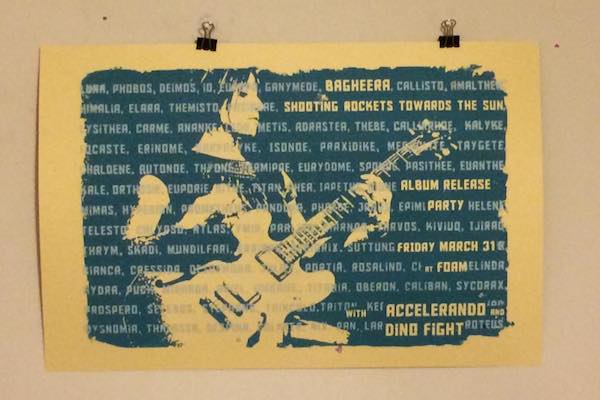 With a few candles burning, Orion staring gently through the basement window from the heavens and the first analog crackle of vinyl, Shooting Rockets Towards the Sun comes alive. The first hit of Theodore Moll's drums to Heather Moll's guitar and voice transports the listener to another place, and maybe another time. As the needle makes its way through each groove layers of melody, song and musical adventure lurk around each corner that is only discovered after repeated listens. The candles flickered and Orion radiates a little brighter as the album progresses from track to track Shooting Rockets Towards the Sun is taking the listener on a journey. "Whenever NASA wants to send something into deep space they shoot it towards the sun first for the slingshot effect," Theodore explains the approach to how this set of songs travels. "It's a space album that is not about space."

"It was the late '90s," Heather said with a bit of glee. In a voice of wonder Theodore echoed, "It was the late '90s." At that time Theodore was still circling the globe with MU330 as well as taming the drums with Climber, whom was formed with Heather, Julie Butler (now Gibbs) and jack of all trades Joey Renza. They released one full-length, an EP and one seven-inch but as Climber was coming to a close, Theodore says, he really wasn't writing, "I had a bunch of songs and Heather had a bunch of songs, and it just started from there." Theodore states. "It was more of a recording project. Theodore would lay down some weird stuff that wouldn't necessarily transfer to a live setting, especially with Climber. We would then lay down vocals and vocal melodies," Heather mused about the band's beginnings. As Climber petered out and MU330 slowed down, the duo found themselves in the studio to knock out the first Bagheera album Twelves in 2003.

2017 finds the band giving the material of the last 14 years released life on their own record label and looking towards the future. In the time between the two albums the duo focused on writing, recording, going back to school and raising a family. "If it was just Heather's band, or my band, one of us could cover the kids. All the advantages of being a two piece band where you are married and living together goes out the window when you have kids," Theodore explains of the time away. They have been able to explore their songwriting partnership in the studio, take sonic experiments and mold them into fully formed songs. "When I write it has to sound good with just me and an acoustic guitar, that is how I approach writing. Then Theodore puts in the beeps and boops," says Heather. In Theodore's words, his songwriting comes broadly from "some weird kernel of inspiration," sometimes even sparked by the give and take of deliberately using "bad equipment," he says. Over the ensuing years they culminated a sound that is a direct melding of both processes to create a unique and solid vision that was only hinted at with their debut album Twelves.

Shooting Rockets Towards the Sun continues with the same indie-rock-pop songwriting of Twelves but goes deeper and into sonic textures and tapestries -- one more telling than what appears to be a three-song suite of "Martian Influence," "Deimos Escape Velocity" and Plate Tectonics of Ceres" halfway through the album. This set of songs begins with familiarity and then quickly progresses into electronic atmospheres which then explodes in a harmonic cacophony that musically sounds like the controls have short circuited sending us on a cinematic adventure. The opening tracks "Stargazing," "Shooting Rockets Towards the Sun" and "Neptune Pt. 1" showcase the band's cleverly written material with themes of space with open interpretation for the listener to derive their own meanings. "All the songs are very personal, from our perspective. The last song, "Departing the Oort Cloud" is about my dad passing and "Neptune Pt. 1" is about our friends Dan and Shannon falling in love and getting married." Ted explains. Where Heather says that "Stargazing" came about after a midnight showing of Harry Potter. "We went to see the movie and after that I drove Ted to the airport because he was going out of town with school. We drove to the airport using the north star. That is how it came about."

It is refreshing to hear an album whose influences are felt rather than overtly heard, from Heather's love of P.J. Harvey and Throwing Muses to Ted's love of production. "When I was on tour with MU330 every night I afforded myself time before going to bed, when everyone else would be sleeping, to listen to music. I would lie with my headphones on in a dark room, and an album and I would really just listen and absorb it. There wasn't anything in the background, it was just me and the music." Those late night listenings to hear every nuance cultivated a love for experimenting and bending sound: "My approach for producing an album is how many of those elements can I use as possible. I try to make an album you cannot in one sitting listen to. I like albums you can listen to and find new little things each time." That deep study in sound helped shaped Shooting Rockets Towards the Sun. Heather explains: "Dynamics are big for me. I need stops, starts and interesting things. For a person who isn't trained as a musician, except a few months of guitar lessons when I was 13, when I sit down to write a song I am not bound by rules."

Spring finds the band in a good place. They have a stable line up with Julie Gibbs returning from her days in Climber, a new album and their own record label, Skeleton Fur. There are another two and half albums in various states of completion. Theodore explains "I could never expect any reasonable record label to put out half of that stuff. I just want to make it available in one place." Shooting Rockets Towards the Sun is pressed, ready for turntables, listener's ears and stages with the band gearing up for "more albums and more shows," says Heather with a laugh.