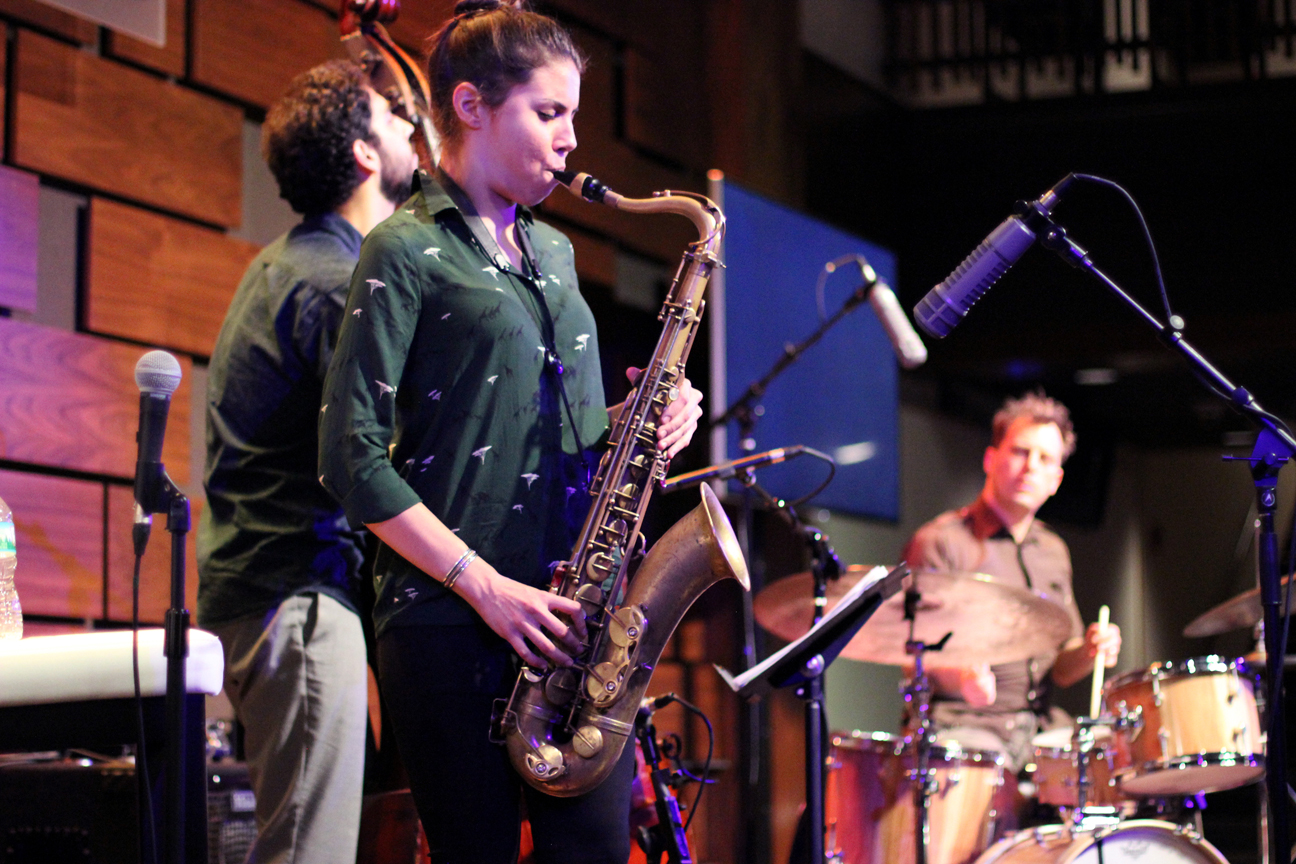 Melissa Aldana blends youth and wisdom at Jazz at the Bistro

Amidst a season of veterans and familiar faces at Jazz at the Bistro, Melissa Aldana offers a youthful face and perspective to the future of jazz. A third generation saxophonist from Santiago, Chile, Aldana has over two decades of study, practice and performance experience despite her youth. A true pedigree of the instrument, she started by learning and transcribing her father's favorite Charlie Parker songs and solos by ear, expanded her musicianship at Berklee College of Music and has continued to earn much acclaim in the prestigious New York City jazz scene. With a style that combines the classic bop of her earliest years with the current trends of jazz, Melissa Aldana offered both wisdom and insight to the crowds at in a four-night stand at the Ferring Jazz Bistro, April 27-30. 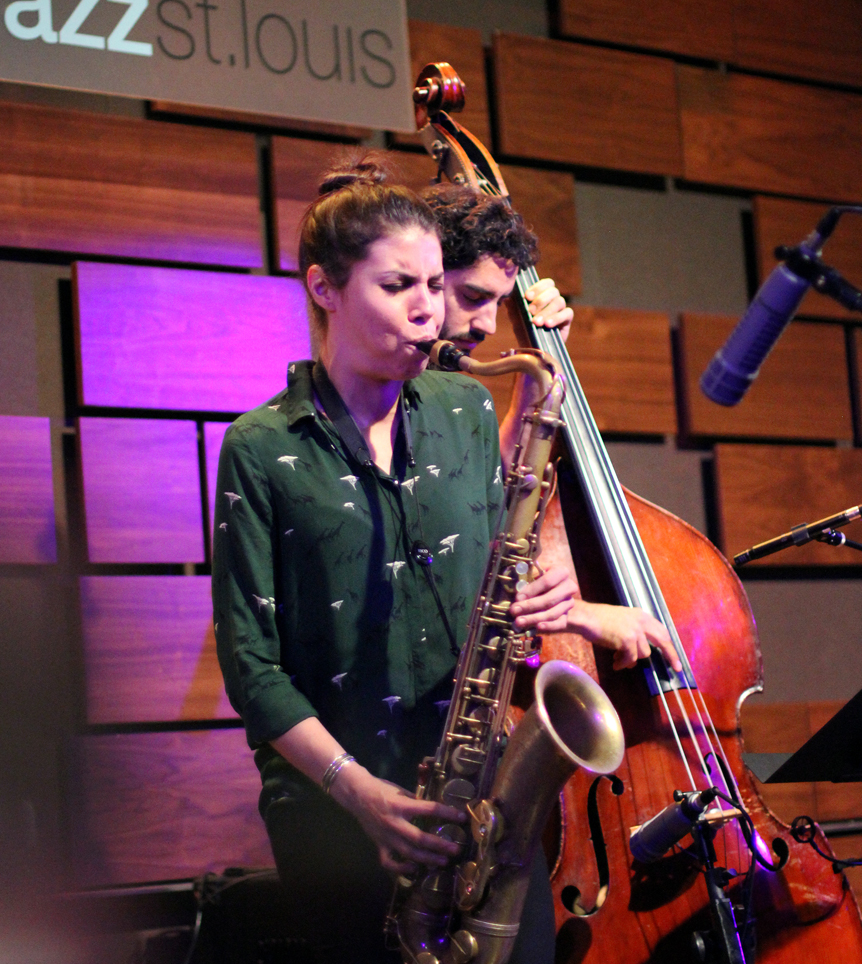 The first of eight sets during her visit started modestly with a tune called "Serving #2," and functioned as a warm up for the travel logged trio and audience alike. Aldana's style immediately stood out as she played, taking an approach that had the rhythmic influence of the bop masters but with phrases that were far more vertically focused, dancing up and down the scales rather than chordal arrangements. To match, the support of her trio often transitioned in and out of groove based segments from a largely more avant-garde foundation.

As the set progressed, the saxophonist's style blossomed. With an aggressive, left foot forward stance, Aldana was most impressive when her whole body was connected to the music, rising and lowering with the pitch of her solos. From early in the set, she began adopting a wider variety of rhythms in her phrases, breaking the flurries with sustained tones and staggered rests and couplets. She continued to impress with the bluesy standard "I Thought About You," embracing a familiar melody that differentiated her style from those that came before her. Aldana's shining moment came in the set's finale, a cover of Thelonious Monk's "I Mean You," bringing the crowd to their feet when she finished a solo full of wild phrasing that spanned her tenor's entire range and nearly lifted her from her feet.

The trio featured Pablo Menares on bass and Jochen Rueckert on drums, each bringing their own perspectives to the group's dynamic. Menares has played beside Aldana for a number of years, notably as a member of her Crash Trio project and a familiar face from the scene in their shared home of Chile. Highly recognized for his own skill, he stuck to a more passive role in the arrangement, but his talents were not hidden. His solos often danced between distinctively different personalities, grooving and melodic for a couple bars and then breaking to a more capricious, yet equally impressive phrase.

From the intro of the first song, Rueckert stood out on drums, sporting two large, modified cymbals (22" & 24") that were utilized constantly in numerable fashions. The German born drummer used the combination of the ride cymbal and a rim shots almost as often as the kick and snare sequences to establish a rhythmic foundation to the songs, often proving to be the most adventurous and unpredictable member of the trio. He had shining moments in every song, but his use of brushes on the cymbals during Aldana's original "Optimism" best exemplified his distinctive approach and he didn't disappoint in the set's final solo.

Together, the trio of New York based, foreign-born musicians combined to demonstrate the power of the traditional jazz trio with a modern style. Though touring to promote the recent release of "Back Home," a new album recorded with the current arrangement, the set list favored the classic and familiar over the new releases and originals. There were no bells and whistles, no wild outfits or lengthy introductions. Melissa Aldana's trio came to the stage at the Ferring Jazz Bistro simply to perform and impress with their musical prowess and impress they did. 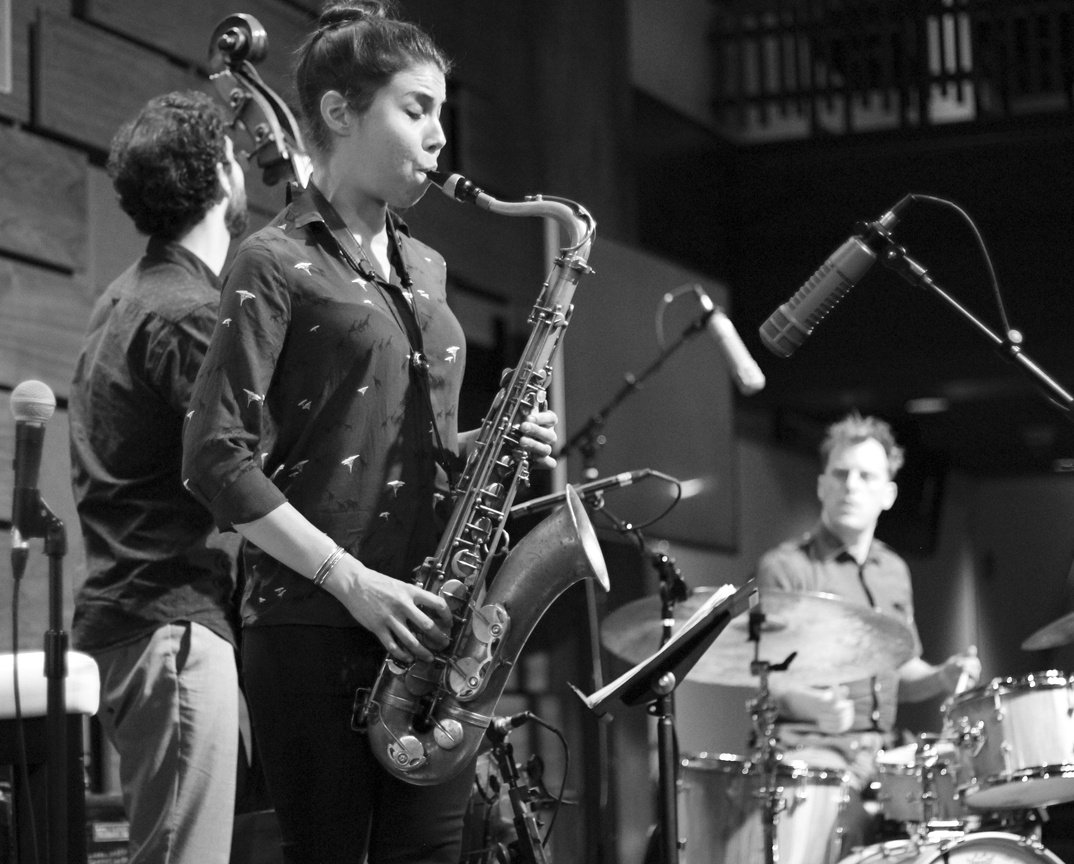