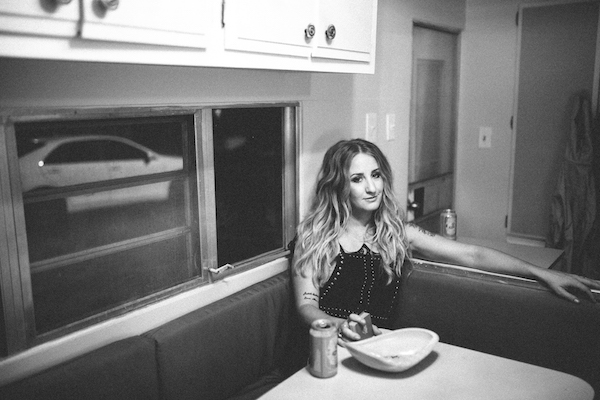 Margo Price on 'All American Made', songwriting, and success

Over the last two years, Margo Price has rocketed to alt-country stardom. Appearances on Saturday Night Live, the Late Show, Austin City Limits and others belie the years of relative obscurity during which Price honed her songwriting and built her band. Price and her husband/bandmate Jeremy Ivey, sold their car and pawned her wedding ring to buy three hours of studio time at Sam Phillips Recording in Memphis. The result was "Midwest Farmer's Daughter," Price's acclaimed debut album, which led to the outstanding follow up album, "All American Made," released this fall. Price plays a sold out show at the Ready Room, Sunday, Jan. 21. KDHX Writer Mike Vachow spoke with Price about her new album, songwriting style, and adjusting to success.

Mike Vachow: I was looking at your website recently, and there's a really interesting set of directions that you give to listeners of the new album 'All American Made'. You asked that listeners have an open mind and open heart as they encounter the new album. Can you elaborate a little bit on that? What are you thinking?

Margo Price: Well, I don't want people to decide whether or not they like the album off of a review or based on what they've heard. I just want people to sit down and listen to it and decide for themselves, 'cause I think a lot of times people see the word political or ... I don't know what other words might deter people away, but I still think it's a really fun album to listen to, and yeah. Just trying to get people to have an open mind, I think it's a good philosophy in life, not just in listening to music, but in day to day life.

MV: One of the lines that really struck me recently as I was listening to ‘Learning to Lose’, is one about being ‘so far away from where I started, but no closer to where I belong.’ Is belonging about part of what it is to be an American?

MP: Well, I think there's many different things that can make you an American. Your birth certificate can make you that. Wearing a shirt with a flag on it can make some people feel patriotic. But I think that the most American thing that has always been, and that we can hold onto today, is that in America we have the freedom to speak our minds and we have the freedom to have an opinion, and when we see something that's unjust, we have every right to voice that opinion. And so that, to me, is what being an American is.

MV: I absolutely agree, and I think that desire to belong, it's a little bit too easy to tap into, and I guess something that, over the course of American history, it's one of the heartstrings that's been played upon. And I think a wider vision that you suggest is a much wiser one.

I'd love to talk a little bit about your song writing. I know that you're a super dedicated song writer, and I'm kind of wondering what that looks like. Do you carry a notebook with you? Do you start with stories and then move to words? Do you always have your guitar in hand when you write? What does song writing look with you?

MP: Well, I think it's, as far as my methods, it's unorthodox and it's always changing. No song is ever written the same way twice, you know? But I'm always listening and always reading, listening to people's conversations, listening to what's going on. I think you've got to keep an ear to the ground and be looking for those clever phrases in everyday language. And I also, I will make a note in my phone or I do carry notebooks around with me and pens and whatnot, but if that's not close, then a napkin or a hotel notepad will do.

My husband and I, we co-write a lot together, and my husband's a really talented writer, too. His name's Jeremy Ivey, and he and I keep each other on our toes because we're really competitive and we're always really quick to tell the other person if it's a good idea or if it's a bad idea, et cetera. We don't worry about hurting each others' feelings anymore, 'cause we've been writing together for about a decade.

MV: And so you arrive at an idea that you think has legs, and then how does it get punched up? How does it arrive in the studio or the rehearsal space? Do you rely on Jeremy and others to kind of pull it all together, or do you typically have kind of a construct for, musically, how the piece is gonna come off?

MP: Well, you know, sometimes I write a song by myself and I see it through all the way by myself and I know what I want the instrumentation to be. Other times I'll have an idea and I don't know if it's good, so yeah, then I'll run it by my husband, and if he likes it, then either we'll finish it together or I'll carry on by myself. And then we do try to play things out live and see how it works with the band. If it works good with the band, then we definitely decide to do it at a show, and if a crowd likes it, then we usually go and record it.

But lately I haven't been playing songs at shows that are new because I want to save them, I don't want anyone to hear them, and so I don't want them to end up on YouTube and then everybody's sharing them. So I'm trying to be little more discreet about it these days.

MV: So when it comes to the recording pieces, one of the songs that I think struck me initially on All American Made was the sort of Memphis soul kind of tune ‘Do Right By Me’. How did that evolve inside the studio? I know you enlisted the help of the McCrary Sisters. How does a song like that get layered up in production?

MP: I think when we wrote that song, it definitely sounded much different on just an acoustic guitar. And then the way that we made the bass really funky and the drums extra gritty, we wanted it to have that country song kind of greasy soul thing going. And so, yeah, Jeremy, my husband, he wanted to play harmonica on it, and that's kind of what we based to song around, was the rhythm section and a harmonica.

And then I knew that I wanted some background singers on it, and I had had the opportunity to sing with the McCrary sisters at the Americana Awards two years ago. And so when I had this song come up, I just could hear their voices on it, and I called them up and they came in and just had the best time. They are so much fun to work with. I mean, they were singing from the moment they walked into the door 'til they were getting in their cars. They just love what they do, and they work so quickly and well with each other, and because they're actually sisters, it's like they don't even have to use words to communicate. So it was really cool to see them work and to get to hang out with them again.

MV: That is really cool. So you've experienced a lot of change in the past two years with 'Midwest Farmer's Daughter' and then 'All American Made'. How have you had to adapt, or does it require a different kind of stamina, or is it not all so different from when you were plugging harder in Nashville?

MP: Well, you know, I manage my time differently because I'm on the road all the time, it feels like, but I think my social life probably suffers more than anything. But yeah, I try to stay calm and healthy, if at all possible, going in and out of airports and all that. I exercise a lot, I read, I try to get enough sleep, and smoke a lot of grass. You know, Willie Nelson has rubbed off on me [laughs].

MV: Right. Well what are you interested in now? What do you think will come next in your musical trajectory?

MP: Well, I'm looking at making album number three here. Really just want to keep going, and keep writing and making records, and keep at it while I have everybody's attention. I think my third album will probably be a little different than my first two. Yeah, you know, we dipped our toe in the water of some different genres for 'All American Made', and I think that it's gonna be really interesting to see where the next year takes us and how we grow as a band.

MV: Do you feel like it's a good time to be an independent artist?

MP: Yeah, there's a sea change going on right now in country music, and there are some people in the industry who are afraid. I am very grateful to see audiences growing for the kind of music I make and I'm committed to staying true to my music. I won't compromise my sound.

MV: Thanks so much for making time for me today, Margo. I look forward to seeing you soon in St. Louis.