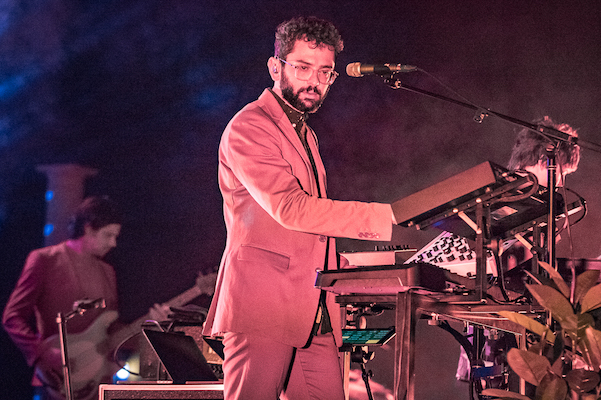 MGMT are all business

With little chit-chat and a setlist that covered their four-album catalogue, MGMT gave the people what they wanted at the Peabody Opera House on Monday, March 5th.

Playing as a five-piece, band founders Andrew VanWyngarden and Ben Goldwasser mostly kept to the front of the stage in a fortress of keyboards. They started big, with a church organ-inspired introduction that led into "Little Dark Age," the title track from their new album. The song's grief imagery paired with heavy smoke, and up-close graphics of a woman vaping, then pointing a vintage camera at the audience.

Visuals were as big of a part of the show as the music. Throughout the night the graphics tried to pull the audience back to reality via the virtual. Images projected onto the theater's large screen with a smaller screen placed closer to the audience created a slight 3-D effect. The Peabody provided the scale necessary for the multi-media show. Otherwise, the set would have been better suited for The Pageant, since the audience seemed too constricted to dance, especially during the punk energized end of "Flash Delirium" that morphed into the bird-chirping opening of "Electric Feel".

Graphics for "Time to Pretend," a song about living the cocaine-and-model rock n' roll lifestyle from their 2008 debut, featured a virtual deer in a POV video game, knocking down Twitter icons. Is this what constitutes the fame now? Seems to be. If anything connected the songs to the graphics through the night, it was this nudge against our virtual lives. It came through strongest on the new track "TSLAMP" -- an acronym of "time spent looking at my phone." The song opened with an extended acoustic flamenco-flavored guitar solo, a big step away from the band's electronic base. As they sang of the sadness of reality missed while engrossed in technology, the home screen of a phone spun behind them. It was easy to assume that the recognizable app icons might be paid product placements if one didn't catch the scathing lyrics.

VanWyngarden and Goldwasser both stepped away from the synth fort and came to the front corner of the stage with an acoustic guitar and a toy-sized grand piano for "When You're Small." While Goldwasser appeared to play the piano, it was barely audible over the synths and seemed mostly for theatrical impact.

They concluded the night with "Me and Michael," one of the few upbeat new songs. It shimmers with late '80s-style chimes and a sweeping pop melody. It was an apt transition into an extended synth and guitar jam opening their biggest hit, "Kids." Now a decade old, the song holds up in performance without sounding dated, a juncture of rock, pop, and EDM sensibilities that's creeping into classic territory. That would have been a satisfying show closer. Instead, they followed with the slower, quieter "Hand it Over," as if to gently lower the audience instead of firing them out with the high-energy spirit. The effect continued with the single-song encore of "Congratulations." It was enough to get the job done.

Click the photo below to see all of Doug Tull's photos of the evening. 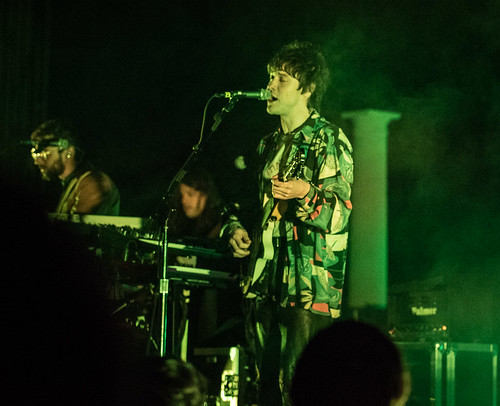