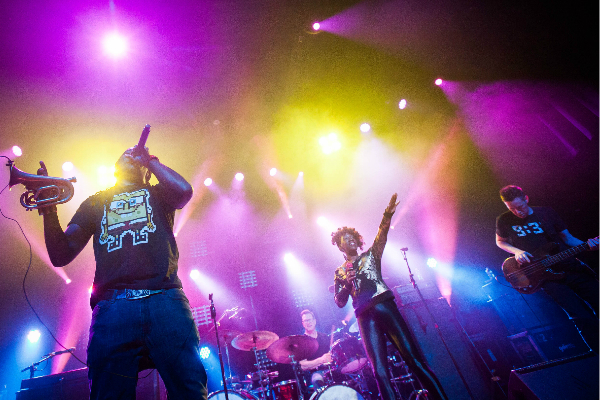 For more than 20 years, New Orleans jazz-funk-jam ensemble Galactic has been electrifying audiences with its unique blend of styles and sounds. The band returned to St. Louis Thursday evening for its first performance at Delmar Hall to a packed house of fans eager to burn up the dance floor.

Galactic is an instrumental group at its heart, consisting of core members Stanton Moore on drums, organist Rich Vogel, bassist Robert Mercurio, guitarist Jeff Raines, and saxophonist Ben Ellman, with standout trumpet player Shamarr Allen joining them on the current tour. The band has partnered with a rotating roster of vocalists both on its recordings and live tours including, among others, Macy Gray, Mavis Staples, Maggie Koerner, David Shaw, JJ Grey, Cyril Neville and Corey Glover.

For the past two years, they have been touring with New Orleans homegrown soul singer Erica Falls, with whom they just released a new single titled "Hold On To Let Go," their first in nearly three years. Falls joined the band in St. Louis and was quick to win over the crowd with her warm smile, infectious energy and powerhouse vocals, which proved an ideal match for Galactic's music.

Prior to introducing Falls, the core band took the stage to open the show with upbeat instrumental "Karate," proving their chops right off the bat as they took turns offering deft solos, their sound fierce and loud in the intimate venue.

While Falls brings a great dynamic, as other vocalists have in the past, Galactic is at their pure best when doing their all-instrumental thing. Moore is an absolute ninja on the drum kit and truly the heartbeat of the band, along with the continuous thump of Mercurio's bass. They obliged with several long instrumental jams during the hour and a half set, living up to their name as they took their sound to an otherworldly place.

Falls worked the crowd with upbeat Mardi Gras-style anthems like "Right On," "Hey Na Na," "Clap Your Hands" and "Dolla Diva," getting butts shaking on floor as Ellman and Allen blared their horns. She showed her vocal range and power with the forceful "You Don't Know." The band offered a couple inspired covers including the groovy Curtis Mayfield song "Hard Times" as well as somehow managing to make Bob Dylan funky with their version of "Like a Rolling Stone."

Though their set seemed to fly by, Galactic left all they had on stage, as they are known to do. The band members may be getting older, but they have every bit as much energy as they ever have more than two decades into their career. The precision with which they execute their meaty stew of funk, jazz, soul, hip-hop, jam rock and electronica is unmatched as they continue to represent the proud musical traditions of New Orleans while always pushing the boundaries.

Click the photo below to see all of Joanna Kleine's pictures of the evening. 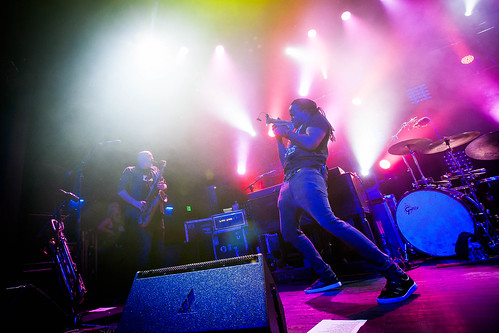