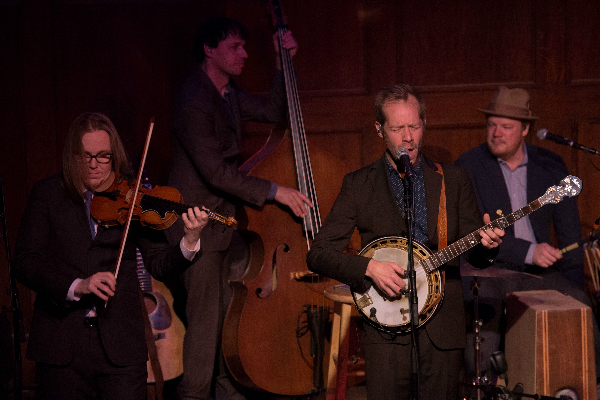 The Steep Canyon Rangers met in Chapel Hill, North Carolina while attending UNC eighteen years ago. Since then they've been pretty busy. They've recorded twelve studio albums, two of which were collaborations with Steve Martin who took them on as his backing band in 2009. This performance at The Sheldon was their first in St. Louis without Martin. Lead vocalist and guitarist, Woody Platt joked, "Last time we were here it was with Steve Martin at The Fox. We're glad to be back in St. Louis without the deadweight." If you were present for that performance with Steve Martin and Martin Short you may recall this kind of humor was the focus, with bluegrass being a side note. With a group as captivating and talented as Steep Canyon Rangers are, it was nice to see them in the spotlight. Their sound is beautifully whimsical bluegrass with high energy hoedown-reminiscent interludes and impressively fast pickin'.

The lineup of instruments is typical of traditional bluegrass (guitar, fiddle, banjo, mandolin, bass) with the exception of also having a percussionist. There is much debate on weather drums should be part of bluegrass, but Michael Ashworth does a great job being in the audible periferie. He plays on what looks like a cajón, a drum he sits on top of, and uses many different sticks and brushes on the top and sides of the box and cymbals. There's no doubt he's talented, but because of the nature of the music he doesn't get featured as much as the strings. I'm sympathetic to the drummer in a band, always in the back, less frequently photographed, but still very important. I was pleased by the incorporation of Ashworth in one portion of the show where he grabbed a guitar and came to the front and was featured on vocals as well.

Their newest album, "Out In The Open," was released in January of this year. They played almost every song on the new record, which wasn't disappointing in the least. It's one of those rare albums where there's not a weak track, it's all good. The breakdown during "Monumental Fool," off their 2015 album "Radio," was the high point of the show and the culmination of the first half. As bluegrass music often does, playing like a rollercoaster of energy with peaks and valleys, the song became quiet at one point with the only noise being a drumstick's tapping. Mike Guggino added in by making noises into the body of his mandolin with his mouth. Each member then joined in slowly and one-by-one, either striking the cymbals, making clicking noises with their tongues or slapping the head of the banjo. Just another instance where they demonstrated their breadth and playful dispositions.

One of the most entertaining aspects of Steep Canyon Rangers is fiddle player, Nicky Sanders. He's been studying classical violin since he was five years old, you could say it shows, and he is very skilled at his craft; but his enthusiasm is perhaps just as impressive. He may stand out a bit just based on appearances, compared to the other clean-cut members of the band, Nicky has long reddish hair and glasses. But most notably, he was wearing sneakers while everyone else was in dress shoes. This choice makes perfect sense once you see him play. He seems to be playing the fiddle using his entire body in a super high-energy choreographed dance with childlike exhilaration. He's jumping and cavorting the whole time he's playing and if he's got a solo, watch out. It was funny to see the other guys get out of his way while he does his thing. There's nothing more entertaining than seeing a musician completely immersed in the performance. Before playing the encore, one of the guys joked that Nicky had some energy left that he needed to get out before ending the show, then he began the final fiddle frenzy of the evening.

It has been said that The Sheldon is the "carnegie hall of the midwest," given those acoustics, one would have to test them out and see what the room is really capable of. Woody asked the audience to try to be quiet for the next set of new songs that they would perform without mics, "If you've got yips, yells and ye-haws, get em out now." The guys gathered close together at the edge of the stage, as if to crowd around a mic that wasn't there for the breezy "Shenandoah Valley." During the song percussionist Michael Ashworth's whistling dueled Nicky Sanders comical pickin' of his fiddle. For their cover of Bob Dylan's "Let Me Die In My Footsteps" only four band members were on stage and only two guitars were being played. They confessed that they don't play many covers, but they liked this one so much it can be found on their new album as well.

While in town the guys stopped by University City High School acting as "Tune Ambassadors" for Can'd Aid, a charity created by Oskar Blue Brewery that helps fund in-need public school music programs. They hosted a music workshop, donated brass instruments and jammed-out with some kids who came to school on spring break to participate. They were also collecting money for the organization at the merch table during the show. And as banjo player and primary songwriter for SCR, Graham Sharp said, "Talking about music is like dancing about architecture, so let's just get to it." 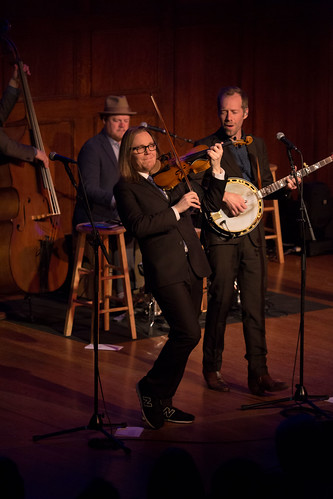