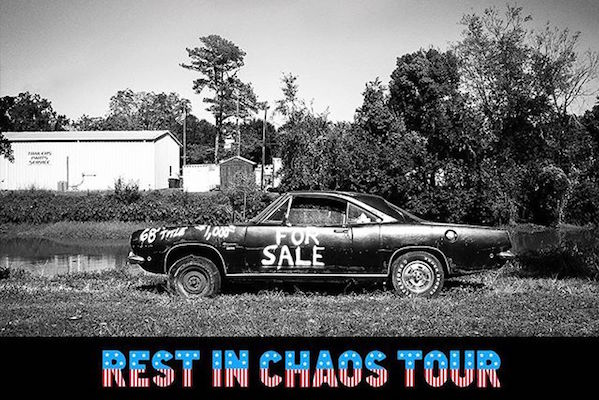 Hard Working Americans inject the Old Rock House with foot-stomping rock and soul on Thursday, May 26

For a band that was assembled a mere three years ago, the members of HWA are so at ease and synchronous on stage, you'd think they'd been playing together forever. Mostly, they just seem to have a really good time -- perhaps feeling free of the demands and constraints of their larger touring bands. Schools and Trucks (playing with HWA between Widespread Panic's packed spring and summer tours) in particular appeared to be in the laid back and jovial spirit afforded by an intimate club show -- something neither gets the chance to do quite as often these days.

The venue was packed with fans as the band took the stage and opened with the dreamy "Guaranteed," with Aycock providing a trippy lap steel solo. Schools offered a funky bass intro and Snider worked the stage, vibrating and strutting with his Mick Jagger-esque physique and dance moves as they picked up the pace with their new album's first single, "Dope is Dope."

Continuing to keep things upbeat and danceable, Trucks pounded out a Bo Diddley beat for Snider's tune "Mission Accomplished." The crowd responded with a resounding, "Yeah!" as Snider wailed the lyrics: "All you really did for sure was get too high. You ever get too high?" Casal stepped forward to shred on one of his numerous impressive solos of the evening. He's easily one of the most underrated guitarists playing today. (Hopefully, due praise will soon come his way.)

After a segue teaser of Bo Diddley's "Who Do You Love," the band launched into fan favorite "Stomp and Holler," a Hayes Carll cover that resulted in the audience doing just what the title states. Snider added some soul on his harmonica while Staehly pounded the keys.

Other set highlights included an epic performance of Frankie Miller's "Blackland Farmer," including a mid-song tease of R.E.M.'s "The One I Love," as well as another absolutely scorching guitar solo by Casal, followed by an all out jam by the entire band, with Schools thumping the bass, his eyes closed and head back in a combination of concentration and ecstasy.

Casal pulled out the slide for the swampy and thunderous "Run a Mile" as lightning began to ignite the sky and the Arch glinted just to the North of the venue's patio. The band closed out the main set with Snider's "Is This Thing Working" and left as the sweaty crowd sweaty cheered for more.

As strong a performance as Hard Working Americans puts on, one can only hope its members devote more time to this effort in the future (which seems a strong possibility at least for Schools and Trucks with Widespread Panic ending its extensive touring after this year). In the meantime, I, for one, will try to join their southern-fried dance party as often as possible.