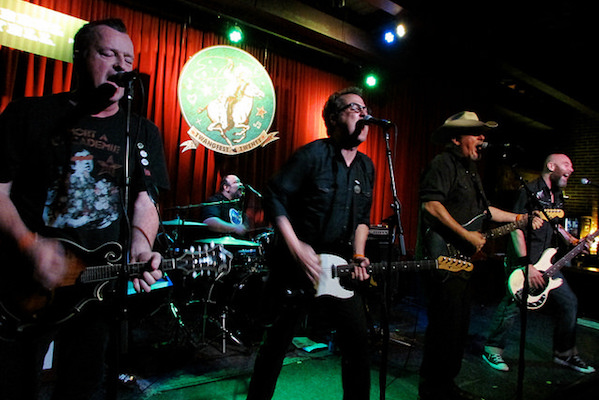 Twangfest 20: A review of night four with the Sovines, the Waco Brothers and Alejandro Escovedo, June 11, 2016

An excited Roy Kasten, DJ of KDHX's Wednesday morning show Feel Like Going Home, jumped on the Twangfest stage goading the crowd to make more noise before the return of Alejandro Escovedo. "Twenty years ago, can you imagine this started in a ditch out by the airport!" The night held a sense of wonder, revelry and excitement for the sold out crowd as the 20th Twangfest drew to a close. This past Saturday night saw festival veterans the Sovines, the Waco Brothers and Escovedo return to St. Louis. Summer finally arrived with it's heat and humidity inside the walls of Off Broadway making it the perfect way to end the festivals long, strange and continuing trip. It was another night of musical joy that brought these three veterans back whom played the stage over the years.

When asked how many people attend the inaugural night, from the stage, Sovines guitarist Matt Benz raised his hand enthusiastically. There was an electricity flowing through the crowd as the band took the stage. This electrical current sparked an energy inside the band to celebrate their career along with this festival. Twenty years later these boys from Columbus, Ohio came back and were ready to play as if it were 1997. The first notes of this tough as nails, hard hitting classic-rock influenced country outfit kicked the party into gear. Singer, rhythm guitarist and saxophonist Bob Starker wailed each song with a rough twang that meant business. His voice, along with sax tone, is not that of a smooth country crooner but a blue-collar rocker ready for a fist fight after a few too many. Drummer Pete English and bassist Ed Mann held a deep and heavy pocket driving the songs hard whether it was played at trucker speed pace or a New Jersey R&B bar band groove à la South Side Johnny and Asbury Dukes. Benz, with his Telecaster and Gibson SG, dug into each lead and riff elevated by the energy of the band and audience. "We might be 19 years older and 10 years slower," Mann proclaimed, but even those years did not seem to slow this quartet down.

In his tan cowboy hat, black shirt and boots, John Langford roamed Off Broadway throughout the beginning of the night casually taking in what Twangfest has become since the Waco Brothers played the first year of the festival. They brought the filth and the fury of their punk rock legacy mixed with a love of American honky tonk. The room exploded with the bands opener "See Willy Fly By," and the bands intensity never let up. It was working-class rock 'n' roll with the spirit of punk rock, which Langford embodies from being apart of the original British punk movement as member of the Mekons.

As the Mekons began to expand their sound, they became students of British folk and American country music these elements, along with a take no prisoners attitude is crucial to the Waco Brothers sound. Bassist Alan Doughty played the Off Broadway stage with an energy compared to an ADHD Paul Simonon but always grooving deep in the songs. Drummer Joe Camarillo drove the band, elevating each song with a power that makes their studio recordings sound tame. Langford, guitarist Dean Schlabowske and mandolinist Tracey Dear took turns providing lead vocals. The British accent of both Langford and Dear draws comparisons to Joe Strummer and Mick Jones of the Clash, whom the band is compared and with good reason being that the Waco Brothers still maintain the punk ethos. "Plenty Tough -- Union Made" and "Had Enough" are two songs where the British influence, live, is prevalent, while Schlabowske brings an American edge with his vocals, much closer to Americana traditions.

The band ran the gamut of songs from their catalog only to increase the emotion with the Bobby Fuller Four classic (as done by the Clash) "I Fought the Law" and T. Rex's "20th Century Boy." "I don't even know how much longer we can play," Langford said before seeing one of the crew say they had time for one more and with that one last song the band launched into "Folsom Prison Blues." The Waco Brothers expunged most of the characteristics of the Johnny Cash original other than melody and chords. They blasted with punk rock abandon that made Social Distortions version of "Ring of Fire" tame and ready for a yacht-rock compilation.

The crowd was now dripping in sweat and gasping for air from the Waco Brothers and St. Louis' heat and humidity. There were secret rumblings on how Alejandro Escovedo was going to compare to the filth and the fury they had just witnessed. Instead of trying to out power the Waco Brothers, Escovedo and his band took the stage creating a deep and sensual atmosphere with the song "Baby's Got New Plans." His voice along with the sparse and growing arrangement took the crowd to a new musical realm. They continued to build that sensuality and intensity that wrapped the audience softly but firmly in his hands through the song "Bottom of the World." The mood then shifted with the opening notes of "Sally Was a Cop." There was a heaviness to the air now that pinned the audience and held them ready to explode with excitement. Escovedo directed each member of the band in solos pushing them to go deeper with more intensity. Snarky Puppy guitarist Chris McQueen pushed his playing from melodic to noise that the rest of the band built on before cellist Brian Standefer was cued to take over. Once Standefer reached a climax Escovedo wailing feedback pushed the band. Drummer Scott Laningham, bassist Daniel Durham and keyboardist Sean Giddings propelled Escovedo and the others deeper in the song. It was this point that Escovedo and the band conquered the stage. "I received some good news before coming here," he said, talking about his battle with Hepatitis C, a disease that crippled him for a number of years. "I was able to get on a new drug and I received word that I have a clean bill of health." As if celebrating 20 years of festival was not enough, the crowd also celebrated a man's music they love and the fact he conquered his health issues. The band then went into the song "Arizona" which documents his struggles up until writing and recording The Boxing Mirror.

"Come on, Alejandro Escovedo!" Roy Kasten, yelling into the mic, waved his hands in the air to make the crowd scream louder, "That's not loud enough!" At the end of the night the audience was in for a few more surprises than they had expected. During the encore Escovedo and the band covered Leonard Cohen's "A Thousand Kisses Deep" after which he welcomed a surprise guest to the stage. Last year saw the reunion of Nadine at Twangfest, a band whose roots in St. Louis run deep and their music is still a staple on the KDHX dial. "I would like to welcome a good friend of mind," Escovedo said, "Jimmy Griffin." Griffin was the guitarist for Nadine along with his own group the Incurables. It is unclear how much this was masterminded by Twangfest originators, John Wendland and Roy Kasten, or by Escovedo himself, but for those in St. Louis to see one of our own join Escovedo and his band for a version of Mott the Hoople's "All the Young Dudes" was a perfect way to send off the 20th anniversary of this festival.