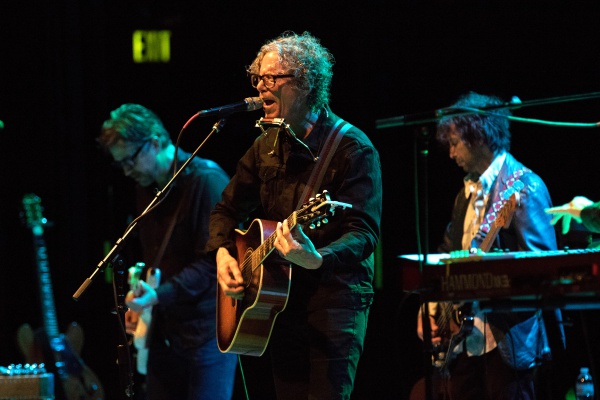 The Jayhawks expand their sound for a mixed but satisfying concert at the Pageant, June 26

Disclaimer: I don't run down touring musicians who work their heart out and perform live in front of hundreds of people, so take the title with a grain of salt. It was a "mixed" concert because the Jayhawks themselves are a mixed and varied crew. First of all, they are hard to describe usually falling somewhere in between "alt-county" to "pop-folk." Also, they have been around since the 80s but have taken long hiatuses between records and tours, so it's hard to say they've been consistent. Finally, there are some songs you will just love ("Blue," "Let the Critics Wonder," "Two Angels")--songs that evoke some of the best of Dylan, Neil Young and Wilco--then there are a whole bunch of songs that are, well, not as notable or lovable.

One thing that you can say about the Jayhawks is their outsized influence on the scene. Since they began touring and playing live they've been a favorite of record shops and independent radio stations. They are credited with strongly influencing Uncle Tupelo and others. They also have a modest fan base who seem to be perfectly in line with their evolving sound. Last night's Pageant performance had a dance floor and people swaying and moving but the concert was set up for seats and clearly geared towards the causal listener. I did test my feet to the beat when they let loose with guitars and harmonica, seemingly off-script and jammy on a few great numbers. I wish there had been more of it, although my date and I danced through many songs, there were some that left us tapping our feet and hoping for more.

Although I found the show a bit of a mixed bag, I have to say I really like the recent album, Paging Mr. Proust, partially because it is so different from their previous releases. On a recent interview promoting the album, Gary Louris (guitar and vocals) speaks as if to preemptively handle critical attacks that the Jayhawks have abandoned their signature sound for something more poppy, "There are things on the record that are shockingly not what people think of the Jayhawks but they are." The album is good. It's experimental, a bit grungy, and yes, definitely more of a pop approach. Definitely worth putting on the Sunday morning Spotify list, buying in vinyl or downloading for your collection.

This review for what it's worth, wouldn't be complete without a huge shoutout to Folk Uke, Cathy Guthrie and Amy Nelson, who opened for the Jayhawks. Not to be confused with Garfunkel and Oates, this duo nonetheless takes a very similar approach with very funny results: "I gave a BJ to a DJ, (and now I'm a radio star)" and their latest runaway hit, courtesy of Netflix's Orange Is The New Black, "Motherfucker got fucked up ('cause he got in the way)," a song that forms into a giant ear worm that basically makes you chuckle all day long.