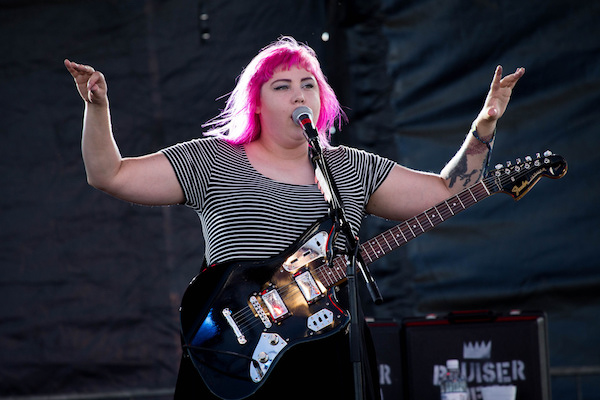 LouFest 2016 was not only my first LouFest ever but also my first music festival in at least a decade, and probably also the single longest stretch of time that I've spent outdoors in recent memory. Weather-wise, it was a beautiful weekend, but there was also no hiding from it -- muddy earth, a light wind, a fiery ball hovering in the heavens above. Among the elements, I was definitely out of mine. Within minutes my feet were heavy with moist, oozy mud, and several times over the weekend I came across a pair of sandals or shoes that had been left behind, stuck one in front of the other as though their former owner had been raptured.

Beset by what was, at least for me, an unprecedented range of stimuli, I sought something familiar, some traction -- solid footing upon which to dig in and get down. This is where Bruiser Queen comes in. No, I didn't just happen to stumble upon their set, and yes, I'd spoken with singer and guitarist Morgan Nusbaum ahead of time with the intention of writing about them. But what I hadn't accounted for in advance was my desire, in that initial moment, for something that simply rocked -- music that was big without being dumb, aggressive without being uninviting. Bruiser Queen's midday set delivered the kind of concentrated, uncut rock 'n' roll that is perennial in its appeal and absolutely powerful in its immediacy. The two and/or three piece unit of Nusbaum, drummer Jason Potter, and newly introduced bassist Cory Perkins make music that is fun and unfussed over. Whatever lyrics get lost in the invariable fuzz of loud live music give way to choruses that are immediately memorable. Their familiar, low-stakes song structures are classic like cocktails or the cut of certain jeans. Rather than messing with what already works, they know well enough to just do it right.

With multiple Best Rock Band wins in the Riverfront Times and almost six years of shows under their belt, Bruiser Queen are at once popular and legit. They are also an extraordinarily hard-working band -- steadily releasing new music, staying active locally, and ever expanding their touring radius, including their first West Coast trip planned for later this year. But at their first LouFest appearance, Bruiser Queen demonstrated the hard-workingness of their music itself. Like ideal hosts at a backyard barbecue who ask guests to bring only themselves, Bruiser Queen make it very easy to enjoy their music. When I asked Nusbaum what, if anything, defines a Bruiser Queen fan, she confirmed that they make music that is supposed to be fun:

Our fans come in all varieties, but the one thing in common is that they like to have a good time. They're like [makes the "rock biceps" gesture]: "Bruiser Queeeeen!" They have their arms in the air; they have a beer. That's why we have can koozies now.

The band's LouFest set traversed their entire catalogue, including songs from the LPs Swears (2012) and Sweet Static (2014), as well as the EP In Your Room (2013) and a well-received cover of "We Got the Beat" that was tipped into the middle of a new song -- refocusing the attention of casual festival-goers who might have otherwise wandered off to the bar or bathroom. These and other new songs -- including the single "Telepathic Mind," which they will be releasing on 7" vinyl in October -- found the band embracing their trademark blend of urgency and earnestness. (If you can't wait until October to see them again, they'll be playing San Loo at the end of the month.)

The highlight of their set, however, was a semi-newish song that has to date only been released as a demo, "Don't Waste Your Summer," which they've retitled "Have Fun" and rerecorded for a forthcoming full-length. As the plaintive, sad surf vibe of its opening kicked into the ne plus ultra of three-chord progressions, Nusbaum's chorus offered a not unfamiliar mantra: "Have fun before you die / Anything else is a waste of time." Day-seizingly obvious? Perhaps, especially within a genre that has historically privileged the fastness of living and the good-lookingness of corpses. Yeah, fine. But as the song swelled and softened with its alternating passages of optimism and regret, Bruiser Queen presented me with a kind of alternate map of the festival. Unlike the folded guide to the grounds given out at the entrance -- and to which I referred almost religiously throughout the weekend -- Bruiser Queen offered a kind of temporal map of the moment, replete with its own obstacles (time) and its own goals (fun). The festival, St. Louis, even the rest of summer, with its conspicuously darkening days -- all of these things are something to do, not somewhere to be.

Outside, alone, and anxiously assessing my SPF situation, having fun seemed newly doable to me.

Click below for more photos of Bruiser Queen's LouFest performance. 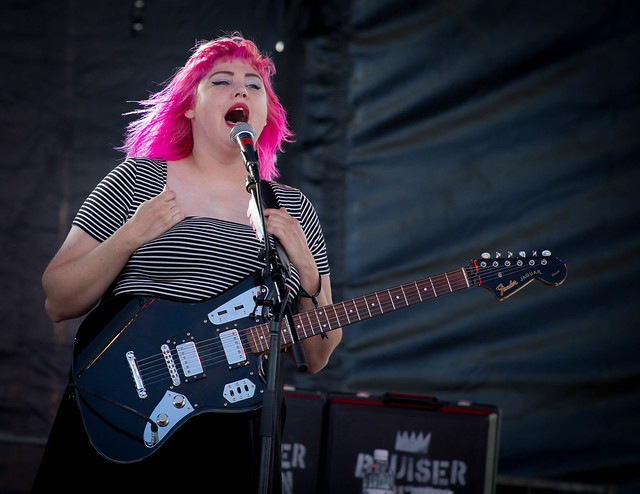