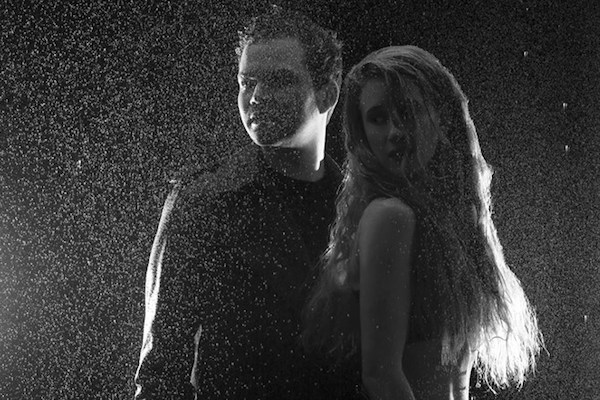 Everything was perfect about Marian Hill's performance at the Ready Room, October 4, 2016 -- maybe a little too perfect. Lead singer Samantha Gongol projected her movements across the room commanding the audience's attention as though they were watching a video. Gongol coordinated every song with her voice and being, nailing it time after time. Down dubby with sax and sultry vocals, with a wildly simple yet weird keyboard maybe sounds like it wouldn't work out, but it does. It doesn't hurt that the duo's production artist Jeremy Lloyd was just as in sync and synthesized.

The variety and maybe a little less precision (in a good way) came when Steve Davit entered on sax. Mostly as short solos, his playing made the crowd go nuts. Every time. It was slightly reminiscent of Morphine, maybe because they were an early band with notable saxophone featured in the slower alt-rock genre. But since Hill's sound is more electronic, the addition of the saxophone brought the compositions down a little bit in what was otherwise an overly formal structure. One highlight of the performance was when Gongol left the stage for what seemed like an impromptu jam session with Lloyd on keyboard and Davit on sax -- the result, at least, sounded less rehearsed than all of the recorded material the band has released. Otherwise, Marian Hill performed with little to no variance from the album full of electric beats and sound blending with a female vocal floating amidst the notes. I admit I was really hoping for more jamming or a closer look into the core of the band, maybe even a cover song (although I have a hard time thinking of a song they would cover, except possibly Sade.)

Of the other two bands on the bill, Shaed and VÉRITÉ, the latter was a mash up of Shiela E meets Dead Can Dance meets Flock of Seagulls. Overall, it's utterly confusing to think about how VÉRITÉ at times would sound like club music, at others slow down into what I could only describe as metrosexual rock. But to the band's credit, the crowd danced largely to VÉRITÉ, the poppiest of the three.

For me, however, it was Shaed that was the grand surprise. The band is made up of Chelsea Lee on vocals, Max Ernst and Spencer Ernst (twin brothers) on synthesizer and drums. Not knowing what to expect prior to the show, I was absolutely mesmerized. Having delved into the band since, I've enjoyed their first EP, Just Wanna See, on the strength of which they're now traveling in what appears to be their first tour. I look forward to checking them out when they come through town again.

On stage, things were pretty simple. There were vertical lights and house lights flashing different colors, and "SHAED" was printed in white caps on a black banner. Taken together the band looked slightly dressed up -- lots of elegant black, but the great energy of synthesis in their presence which, I think now, must have come from having played together for so long -- being able catching each others cues, and staying with and on top of the music. The brothers have been playing together since high school, and Chelsea Lee joined them back in 2013 when they called themselves The Walking Sticks. With that in mind, I congratulate them on their having found as great a label as Photo Finish (which they share with Marian Hill).

Looking back, maybe Shaed reminded me a bit of Fleetwood Mac or possibly Annie Lennox because of the shared simplicity of their lyrical approaches (and partially because the Lee's hair was long and flowy like Stevie Nick's). Of course, whenever you have a rocking diva female singer, with long beautiful locks and a high vocal range, it's always reminiscent of a band you already like (at least this is true for me). Whatever influences Lee may have inspired or been inspired by, she's got that kind of resonating voice that seems to come out of a cloud like a beam of light: glorious.