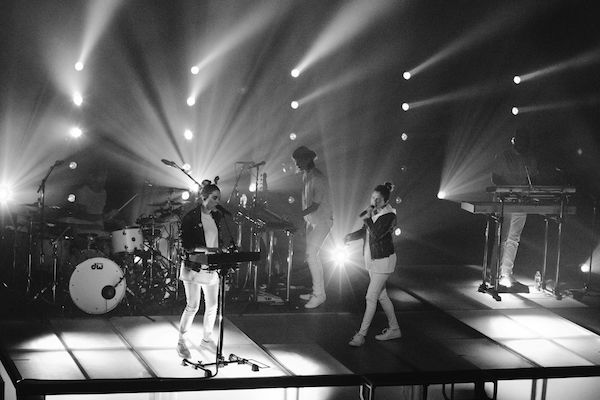 Sizes May Vary: Tegan and Sara with Torres at the Pageant, October 22

On Saturday night, the Pageant struck me as equally too big and too small, as though I'd somehow stumbled into the hotel from The Shining or the house from House of Leaves. For Tegan and Sara, the space barely seemed to contain their energy, sound, and style. I half expected a surprise twist at the end of the show where the roof and walls pulled away to reveal that we'd been in a stadium the whole time. For the opener Torres, however, the size of the live venue seemed at odds with the almost dangerous intimacy that her recorded music requires of its listener.

To be fair, Torres is probably the artist I have recommended more often than any other in the last two years. Writing and performing as Torres, Georgia-born musician Mackenzie Scott creates songs that are beautiful without seeming precious or breakable. A sense of loss pervades her music, alternating between quiet moments -- as though whispered through a confessional -- and ragged, cinematic rock that is urgent yet thoroughly textured. Her most recent album, Sprinter (Partisan Records 2015), is stunning in its songcraft, from the driving dark pop of "New Skin" to the elegiac self-reflection of "Ferris Wheel." At the Pageant, however, her voice seemed to struggle against the sound of her band as it diffused across the stage and into the far-off heights of the mezzanine. Propelled by the sparse rhythm of a drummer who seemed practically allergic to cymbals, Torres mixed recognizable highlights like "Honey" and "Sprinter" with what felt like a lot of new material, including a synth-heavy song that appropriated Billy Squier's "The Big Beat" like it was a Halloween costume. But the louder parts of the set felt too anxious, overwhelming, and the quiet parts felt too far away to fully grasp. Torres's solo tour earlier this year -- including a show at The Firebird in January -- was perhaps better suited to her sound: up close, personal, heavy in a way that kind of crushes you.

Alternately, Tegan and Sara delivered an exuberant, expansive set that the Pageant seemed only barely able to contain. Dressed in matching outfits that combined the clingy, menacingly white jumpsuits from A Clockwork Orange with leather jackets reminiscent of the Ramones' burnout chic, sisters Tegan and Sara Quin traded songs throughout the set with a near-digital efficiency: "Sara" songs were followed by "Tegan" songs all the way down.

The band walked onto the stage to Le Tigre's synth-and-Casio cover of The Pointer Sisters's "I'm So Excited," which proved to be an impeccable choice. Throughout the evening, Tegan and Sara's essentially covered much of their own music by reconfiguring and recasting older songs in the bright, stylized synth-pop of Heartthrob (Warner Brothers 2012) and Love You to Death (Warner Brothers 2016). Like Lauren Hill's recent LouFest set, in which the acoustic energy of Miseducation underwent a space-age transformation, Tegan and Sara have retrofitted their back catalogue to catch up with their current trajectory. To wit: if we really want to crunch the numbers, Tegan and/or Sara played guitar on only three songs in the entire set.

After the initial surprise of an overly minimal "Back in Your Head," the revised versions nested neatly with newer standouts like "Closer" and "Boyfriend." The crowd still sang along with everything; to those whom their lyrics have indelibly affected, the differences in sound were as superficial as a change of clothes. Still, Tegan and Sara seemed to acknowledge their high-gloss makeover. Toward the end of the set, they thanked the audience for "letting us be the band we want to be." This sense of mutual respect and recognition was prominent throughout the night. In a series of short breaks that punctuated the set, Tegan and Sara stepped toward the middle of the stage -- literally sharing a spotlight -- to speak to the audience with what seemed like genuine appreciation. They presumably do this every night, in every city, but through their honest, joyfully awkward banter, they somehow found a way to make us love them more. From recounting a trip to the City Museum earlier that day ("Children squeeze themselves through what can only be described as sewer grates") to admitting past transgressions ("I stole a Snickers bar from a gas station while on acid when I was fifteen") to an all but requisite nod to our political moment ("Just because we're Canadian doesn't mean we're not ready for this election to be over"), Tegan and Sara were at once larger than life and as earthbound and boring as everyone else ("Let's see if we can still catch the opening monologue on SNL").

The most memorable moments of the night came out of these bits. Tegan and Sara were funny. They were fun. Their set was divided neatly into music parts and talking parts to the point that it was pretty clear they were putting on a kind of contemporary variety show. And they did it all while pushing their own music in new and celebratory directions. The night's performance was an experiment that could have easily failed if not for what appears to be an almost otherworldly confidence. They closed out the night with probably the best, totally charitable song on Love You to Death, "Stop Desire," and they did it like it was a super-easy thing to do.

At one point earlier on, a stranger whom I'd haphazardly befriended leaned over in the middle of a song and said "Write this in your review: I'm in heaven! " It seemed like a stretch, but I can't say I didn't believe her. Tegan and Sara had a similar effect on me, if not religiously than spatially. In the moment, I couldn't have imagined anything bigger.

Click below for all of Abby Gillardi's photos of Tegan and Sara and Torres. 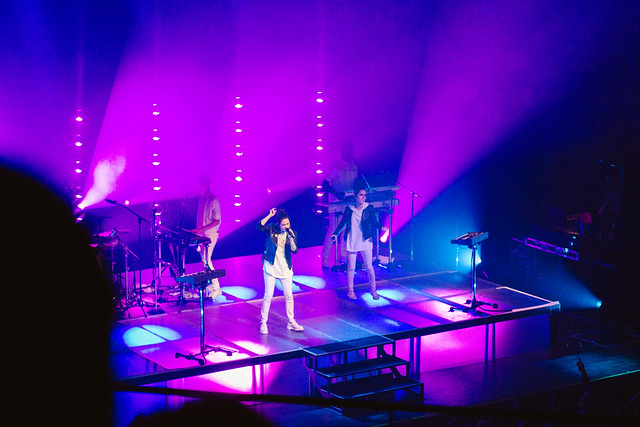