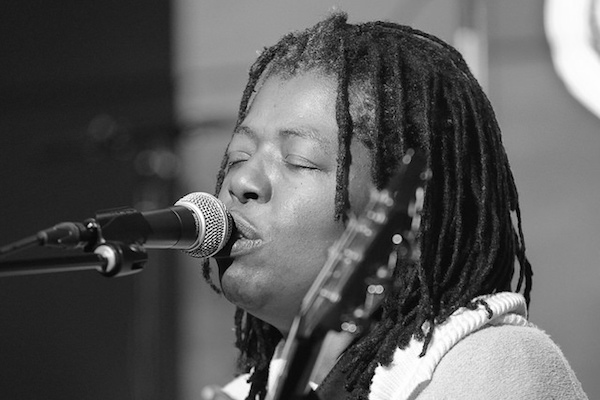 Howlin' on Friday with the Fab Foehners, November 4

Sharon and Doug Foehner usually can be found busking outside the museum on Saturdays. It is a tradition born of love, family and the blues, but last Friday the Fab Foehners came inside to kick off the National Blues Museum's Howlin' Fridays series on the Legends Room stage.

The Foehners moved to St. Louis in the mid 80s but the real story starts in upstate New York in 1977 when Doug was 14. As Sharon tells it: "We grew up blocks apart but didn't know each other. I knew his brother. He played drums and I wanted to jam. When we did, I met Doug." They have been jamming ever since.

Sharon's family had migrated from Macon, Ga. to work as sharecroppers. She likes to tell that her Mom went to high school with James Brown and her Auntie went to church with Little Richard. Her eclectic musical tastes were influenced by gospel blues (mom) and jazz (dad) but she also loved classical, soul and more. At the age of nine she began Suzuki lesson for bass violin. As a teen her interests shifted to rock 'n' roll, she says, "because I wanted music with a little bit more energy."

Doug's influence was his father, Gale Foehner, a well-known ragtime-jazz pianist. As Doug puts it: "He was a piano man. He tuned them, fixed them and played them in bars all over the country." Doug too got hooked on rock 'n' roll. He was a bass player and Noel Redding (Hendrix/bass) look alike in a Jimi Hendrix style band. He said, "I was hired to learn all of the Hendrix music. We did four or five years together with a list of 110 Hendrix songs and played the Bitter End in NYC." Doug's musical interests began to shift as he listened to Memphis Minnie on college stations.

In 1983 Doug's Dad moved to St. Louis where he became a regular on the music scene. In 1986, Doug, now "heavily addicted to Memphis Minnie," moved to St. Louis where he found lots of her 78s and the beginnings of a serious record collection. Gale took his son to the jazz clubs to meet his friends and hear Dixieland bands like the St. Louis Ragtimers. Having found his blues Zen, Doug became a master of the slide guitar. But, he will laugh and tell you, "I repair furniture for a living. Sharon got to make real money and play the music."

When Sharon arrived in April 1987 there were three kids and no plans for a career in music. Seeing her first local music, The Broadway Rhythm Band -- a supergroup led by Stacey Johnson with Buzz Martin on guitar, Jimmy Hines on bass, and Keith Robinson on drums -- "was mind-blowing," she says, "I stared at Hines all night." Between breaks she would talk with him and he would teach her bass lines. She marveled at how "cats here were so generous in sharing their knowledge." Jam sessions became her way to play, which is how she met the ragtime piano great James Crutchfield. One Wednesday night in 1989 she sat in on bass with his band at the Venice Café. She kept coming back and Crutchfield told her, "I can't pay you but you can jam with us." Two months later he told her the guys wanted her to join the band.

Sharon went on to blaze a musical trail through St. Louis and around the world. She formed the Urban Blues Express with Bennie Smith in 1995 where she sharpened her bass skills and learned the guitar. In 2004 she moved to the Rich McDonough band now known as Rough Grooves. She still plays with them as well as with Paul Bonn and the Bluesmen. Doug also plays locally with Raw Earth who put out a CD last May.

Music and family has been a constant in the Foehners' busy lives. Over the past decade Doug would busk with his Dad in front of the Tivoli theater on Delmar. Beulah, the oldest of their three children, continues the musical tradition as a vocalist singing a song written by Sharon, "Homeless Child," on the upcoming St. Louis Blues Society 16 for 16 CD. Of course, mom is backing her on guitar and dad is on the slide.

The Foehners' skills and love of music is apparent onstage where there is no playlist. When asked, they laughed and Sharon said, "our playlist is one complimentary key after the other." Doug agreed, "she likes to pick songs that are pleasant to the ear -- a song in the key of G and then a D or a B -- and we like to mix it up, a little blues, a little jazz."

That's the way the Happy Hour show went. Doug had the slide going with Sharon on guitar and vocals. Yes, Memphis Minnie was there with "Ain't Nothin" and "When the Sun Goes Down." So was Louis Jordan's "Is You Is or Is You Ain't" and Big Bill Broonzy's Big Bill #2. Howlin' Wolf made an appearance with "Nature" and "Howlin' for my Darlin." Son House dropped in with "Death Letter Blues." Doug's slide was flawless. One instrumental, "Maui Chimes," required some delicate harmonic fingering. You could see Sharon smiling at him across the stage as his left pinkie deftly worked its magic. Sharon's vocals were tender, emotive and soulful. You could it see on her face as she would close her eyes and lean into the mike. And, you could see Doug smiling at his playmate; they were in tune. It was a joy to be there, a real happy hour for all.

Howlin' Fridays which continues throughout November at the National Blues Museum includes a 5-7 p.m. Happy Hour show followed by a concert from 7-10 p.m. The Fab Foehners will return to play happy-hour sets on November 18 and 25. The concert lineup includes Big George Brock (11/11), Marquis Knox (11/18) and Skeet Rogers and the Inner City Blues Band (11/25).

Click below to see more of Bob Baugh's photos of the Fab Foehners at the National Blues Museum. 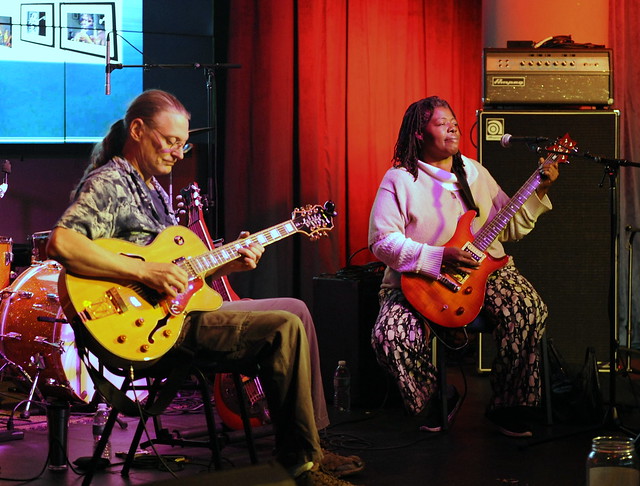