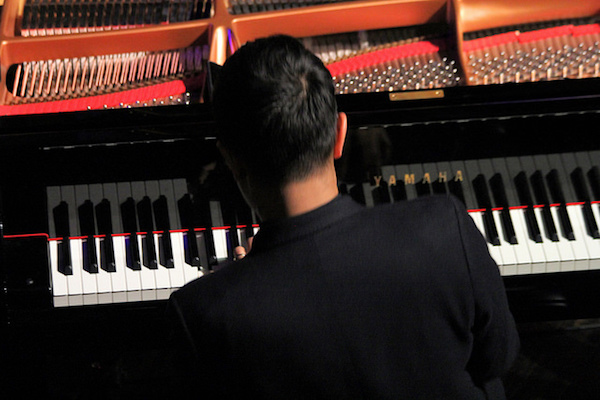 The Vijay Iyer Trio plays Jazz at the Bistro through Saturday, December 3

I had no idea that the bass could be such a physical instrument until I saw Stephen Crump of the Vijay Iyer Trio play the instrument at the early show at the Jazz Bistro on Wednesday night. Crump bobbed up and down and then ebbed back and forth with the jazzy rhythm. He then slumped over the giant instrument and melted into it for one of his solos.

The other two members of the trio, Vijay Iyer on piano and Marcus Gilmore on drums, though not as active as Crump, were still clearly electrified by the music as they swayed in the dim blue lights on the stage. Gilmore kept the beat with a continuous low tin beat, which never threatened to overpower the other two quieter instruments. Like Crump, Gilmore also played two solos during the set.

Vijay Iyer, the jazz pianist for whom the trio is named, undulated over the grand piano. Strong, loud, and fast at times, Iyer’s piano faded into the background at other times, sprinkling perfectly placed droplets of notes over the other two instruments.

Patrons could buy copies the New York based trio’s albums at the door. Their most recent album, Break Stuff , released in 2015, received five stars in Downbeat Magazine. Produced by Manfred Eicher, the album breaks down and recasts several of Iyer’s earlier works, bringing new life to his already eclectic work. Break Stuff was not the group’s first hit album though. The trio gained fame for their previous two albums, Accelerando, released in 2012, and Historicity, released in 2009. International critics with Downbeat and JazzTimes hailed both albums as the #1 jazz album in 2012 and 2009 respectively.

In addition to his work with the trio, pianist-composer Iyer works on solo projects and serves as the Franklin D. and Florence Rosenblatt Professor of the Arts in the Department of Music at Harvard University. He also works as the director of the Banff International Workshop in Jazz and Creative Music. Known as a dynamic and expansive pianist who takes musical risks, Iyer was voted Downbeat Magazine’s artist of the year in 2012, 2015, and 2016.

Gilmore, originally from Queens, New York, is the grandson of another famous drummer, Roy Haynes. Born in 1986, he joined the trio in 2003 at the age of 16. Downbeat Magazine named him their top Rising Star Drummer. In addition to drumming with the Vijay Iyer Trio, he leads his own music ensemble and has already toured with a wide array of musicians.

Originally from Memphis, bassist-composer Stephen Crump brings a bluesy element to the group, and plays both electric and acoustic bass. Crump has collaborated with many other diverse and dynamic artists and has been featured in several films. He began working with Iyer in 1999.

The set ended with a standing ovation and a message from Iyer. “We all need to work together to get through whatever is to come,” Iyer said. “And it starts with music.”

The Vijay Iyer Trio will perform at Jazz at the Bistro 7:30 and 9:30 through December 3.

For more of Gary Eckert's photos of the evening's performance, click the image below. 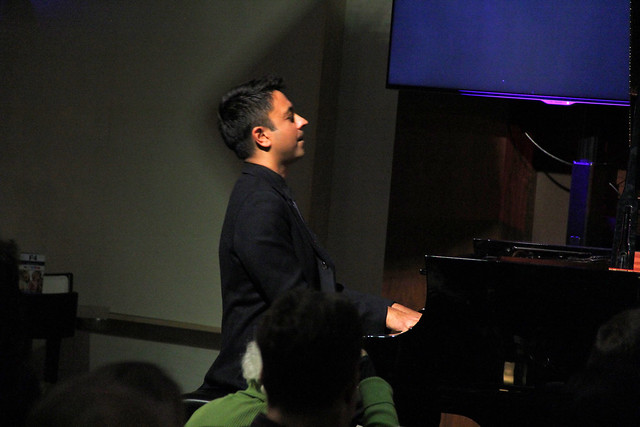