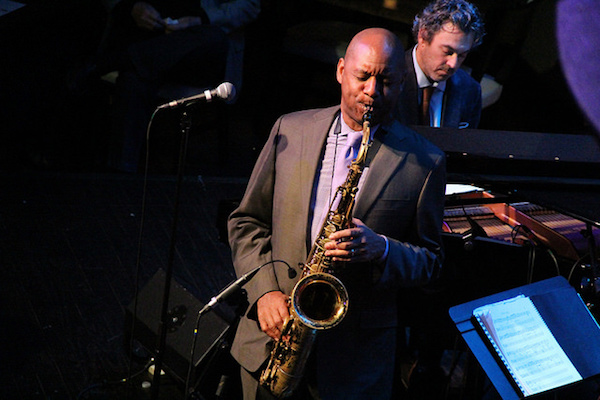 With a lineup that hasn't budged since 2009, the Branford Marsalis Quartet is an elite musical clique that can only be infiltrated by the coolest cats on the scene, which is precisely what Kurt Elling has proven to be. The Chicago crooner brings two decades of turning heads to the already immense pool of experience in Marsalis' saxophone lead foursome, releasing Upward Spiral in 2016 and treating select crowds to the unprecedented union of these two stars. Jazz at the Bistro played host to two nights of shows, giving four opportunities to experience a set music that was far from the ordinary.

Even from a distance, it was clear that the final performance at the Ferring Jazz Bistro was met with high expectations. With the first set slow to clear out, the line to enter filled Nancy's Jazz Lounge to capacity with a small overflow of warmhearted people braving the biting wind outside. Despite the delay, the venue's staff expertly filled the Bistro to its capacity and immediately dimmed the lights to begin. Jazz St. Louis' Bob Bennett, the man charged with intrepidly booking the venue's prestigious lineup, stepped to the stage to introduce the band, but his role didn't end there. The quartet took the stage and Branford Marsalis immediately started to tease Bennett over the limited two-night engagement, punctuating each sentence with the name "Bob," spouted with a melodramatic amount of disdain, and followed with a short "theme song" riff from the band, much to the amusement everyone on and off the stage.

When the delays and jokes had subsided, the show began with the Branford Marsalis Quartet playing the first selection without vocals. Joey Calderazzo began the music with a short piano introduction before Marsalis joined in on a soprano saxophone. The two handled the melody in beautiful synchronization over Eric Revis playing a jumpy, double-time walk on the bass and Justin Faulkner guiding the rhythm with a pronounced focus on his drum set's cymbals. The leader soon relinquished the focus back to the piano for an extended solo and trio style jam before he returned to put on a demonstration of his prowess on the horn. After a flurry of riffs and phrases that traversed the scales, Marsalis signaled the band to a quick close and an immediate applause.

The second number, "There's a Boat dat's Leavin' Soon for New York," originally from Porgy and Bess, began with Kurt Elling strutting up the ramp to the right of the stage and immediately absorbing the collective attention of the room. The vocalist took the first solo with his signature scat style, but Marsalis and his sax wouldn't be outdone and he soon reasserted his leading role with a groovy style. Calderazzo followed with a solo of his own that danced across the keys. After rejoining the melody, Elling returned to the spotlight with another solo of spoken riffs over a funky breakdown from Revis and Faulkner, toying with the microphone position and the tone of his voice to add dimension to his sound. By the end of the fading outro, a new standard had been set for the night and crowd was eager to hear each coming beat.

They highlighted many of the songs from Upward Spiral, but the clear highlight of the evening was their rendition of Sting's "Practical Arrangement." Branford Marsalis started out on the introduction, building ever more complex lead-ins to a repeated, three-note riff that simply couldn't be before relinquishing the lead to Elling on the microphone. The lyrics came in over a passive piano backing and Faulkner's drums joined near the end of the first verse. As the song continued, Marsalis returned to the mix in a harmony roll, but then stole the spotlight again at the solo. Unlike the assertive styles of the solos throughout the night, this performance was much more reserved with the mood of a breathy whisper, well in tune with the lyrical theme of the song. Faulkner and Calderazzo added their own solos, each soft and ethereal, contributing to the illusory tone of the song. The sax and lyrics returned for the final verse, closing out a performance that was nothing short of an experience.

The night closed with a piece that gave Eric Revis a well-deserved moment in the focus, serenading the crowd with his bass at the lead. Each performer took final solos and Elling added the extra treat of augmenting his voice with an empty drinking glass to mimic the sounds of a muted trumpet during his segment. At the close of the set the band walked out to the expected extended ovation.

It took over three decades before the Branford Marsalis Quartet featured a vocalist, but Kurt Elling took the honorable role and demonstrated just how great the arrangement can be. For two nights, St. Louis was afforded the opportunity to experience this collaboration of the ages. The only regret shared by anyone involved, as Marsalis put in before the set began, was that the engagement was limited to two nights...Bob.

To view all of Gary Eckert's photos from the evening, click the image below. 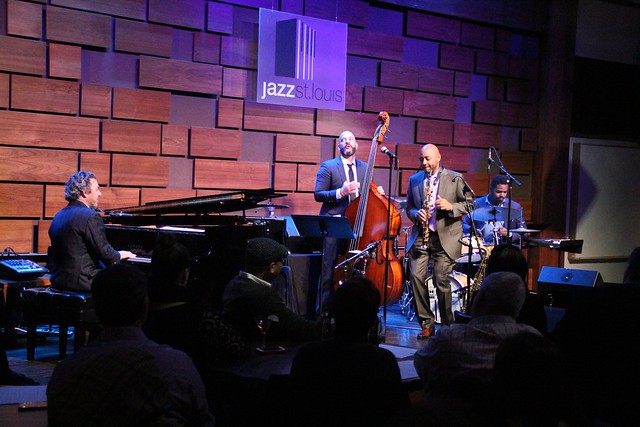