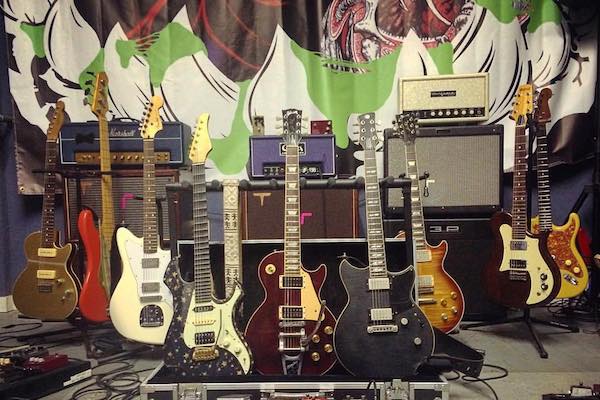 I have finally seen Diarrhea Planet. I have finally seen the band that is supposed to restore my faith in rock 'n' roll (according to BuzzFeed). I have witnessed the four-guitar juggernaut that's regularly played St. Louis, including last year's LouFest. I have experienced firsthand the splatters of beer from cans held aloft while a merry band of men in tight jeans, fairly beside themselves with excitement, turned the entire floor of Delmar Hall into a mosh pit for 60 full minutes last Friday.

To be honest, I was not at all certain that Diarrhea Planet was capable of matching St. Louis's beloved Bruiser Queen, who shimmied through a loud, fast "best of" set. Who knew two people were capable of making such a racket? I'm no stranger to BQ shows, but Morgan Nussbaum's impressive pipes were in especially fine shape on Friday night, effortlessly filling every corner of the room and probably the parking lot, too. Love for the fans and pride in our city's fine microbrews was in the air. Did I mention 4Hands was celebrating its fifth birthday and everyone may have been feeling a little soppy? "We've got the best food, the best beer" (indicating 4Hands Citywide banner) "and the best music," crowed drummer Jason Potter, during a mid-set shout-out to the enthusiastic hometown crowd. BQ exited the stage after bringing down the rafters with "Old Man Winter," and if that had been the show, I would not have complained. But then...

Diarrhea Planet came out, an unassuming band of fresh-faced twenty-somethings in T-shirts. And from the moment they shouldered their guitars, a blistering, blinding, rapid-fire tower of noise was rained down upon my head. How to describe, if you haven't heard them? Clearly, they were influenced by heavy metal, but there is also a seemingly un-cheeky appreciation for '90s pop-punk. Like Butthole Surfers and Rage Against the Machine (except a-political), they are a sort of post-hardcore, "alternative" metal. I never thought I would favorably compare someone to Blink 182, but there is something there, too, albeit with way more guitars. Like any punks worth their salt -- that is, anyone influenced by the Descendants -- the drumming is fast and muscular and the shouted vocals pushed to the respective limits of each singer's highest register until they fray. Lyrically, Diarrhea Planet manage to be smart but a little ignorant at the same time. (There is a song called "Ghost with a Boner." Also, the band's name is Diarrhea Planet.) You could headbang a mullet to this stuff, but it's almost more conducive to pogoing. The guys themselves seem rowdy but nice, flattered by the adoring crowd in front of them who sang along with old and new material alike. They took onstage selfies -- good-naturedly snapping pano after pano as fans handed over their phones -- and they were generous with the high-fives.

Diarrhea Planet had been originally scheduled to play the 4Hands birthday party in January, but an ice storm (did we actually have ice?) pushed the show up to March. "This is the first show we've played in 2017," singer-guitarist-all-around-thrasher Jordan Smith announced. (Smith also introduced most of the set with, "You might not know this one, it's old...," but everyone did know it and sang along.) Despite some good-natured bantering between songs -- the first digression had to do with some confusion as to which direction St. Louis is from Nashville, the band's hometown -- there was not really a pause from the opening assault of "Lite Dream" to the last, a convincing cover of Rage Against the Machine's "Bulls on Parade." The slowest things got was during "Platinum Girls," which is sort of a love song (although it's more about wanting to be your "20 times a night guy" than actual feelings, if you get my drift). On stage, the band's sound is huge. They are definitely an act to catch live if, like me, you are one of the three people in St. Louis who have not seen them yet. Much has been made of the four guitars, and the wall of sound on a live stage is massive yet never overpowered the rhythm section. And despite projecting a somewhat unwashed slacker vibe, each of the guys can shred. This is some professional-grade, arena-worthy rock, everyone.

To wit: that Rage cover. I imagine it's fairly difficult to fill Tom Morello's shoes but Smith did it, and as singer Evan Bird (who must have been trying to lose his voice) launched into the last chorus, there was a gunshot-loud crack that dumped a bunch of confetti and streamers on the crowd. Everyone went bananas. Everyone went home happy. Faith in rock 'n' roll was duly restored.