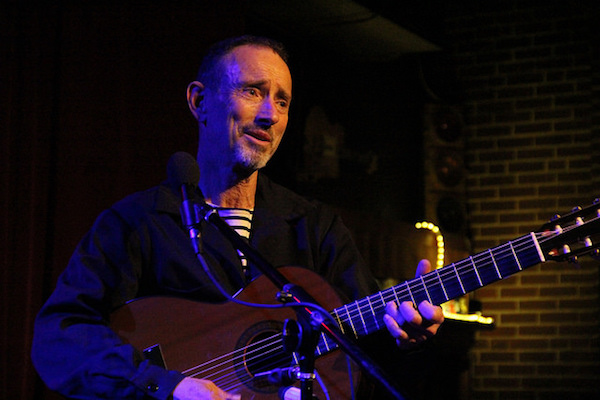 Jonathan Richman charms at Off Broadway

To be fair, I wasn't expecting to see young, dreamboat Jonathan Richman circa 1974, but when you go to a show to see an objective legend - the once-frontman of the Modern Lovers, the guy who transformed countless lame teens into fervent punk rockers - you expect someone larger than life. But when Richman and drummer Tommy Larkins walked onstage at Off Broadway last Friday night, looking almost small under the white lights, I was reminded that Jonathan Richman is only mortal.

And so he was, though that turned out to be his greatest charm. There was something very personable about Richman's stage persona, like watching a friend onstage. In fact, I felt the need to sort of hunch behind the tall guy in front of me while typing notes into my phone (oh, the rare blessings of being 5'1"), not because I didn't want to be yelled at but, weirdly, because I didn't want Jonathan Richman to think his performance was uninteresting.

Richman was, in all respects, a one man show - sometimes crooning behind the microphone, sometimes stepping to the edge of the stage as if to say, "Come closer, there's no need to fear," sometimes picking up maracas or sleigh bells and dancing (which involved a lot of shimmying and hip-gyrating and was strangely hypnotic, kind of like watching your weird uncle get down). And though his looks might have aged, Richman seemed to be in a state of unblinking lucidity that only one-in-a-million artists could ever hope to achieve. (I say unblinking because Richman literally did not blink, or at least not as much as a normal man should. He had a way of staring into a fixed point in the crowd during guitar solos that was equal parts unnerving and impressive.)

At this point, I would be remiss to mention that the breadth Richman's technique is really imperceptible until you see him play a live set. Almost every song featured an instrumental break, which is, in my opinion, where Richman might've shone the brightest. Chord progressions in "My Baby Love Love Loves Me" become the bickering voices of lovers (which Richman compliments with a mock-angry face); the high-pitched guitar slides in "That Summer Feeling" are followed by an explanatory "Mosquito." And the audience actually laughed, which I've never seen happen during an instrumental piece and which truly demonstrates the interpretive depth of Richman's guitar-playing: the guitar was another voice altogether.

But what really made Richman's performance - and his entire musical persona - so darn enjoyable was the wide-eyed easiness it all. If you've heard any of Richman's recordings, you know that his voice is breezy and laissez-faire and borderline conversational at times. This quality was even more obvious on stage, where he would often slip out of singing to make a little quip - or, in the case of "Old World," a two-minute story about baseball pitcher Walter Johnson that he had heard from Bill Klem. Some of Richman's songs are simply sweet in a way that makes couples pull each other close, like the show's encore "Not so Much to be Loved as to Love." Others were considerably more lighthearted like "People Are Disgusting," which details humanity's more nasty habits ("Wipe the toilet seat down! A maid has to clean this!"). Overall, it's hard to articulate the sheer likability of a punk legend who can stop mid-sentence to tell the audience, with a laugh, "I'm just making shit up" (as he indeed did during a cover of King Harvest's "Dancing in the Moonlight").

At his heart, I think Richman is a genuine person in a way that many big stars aren't. Yes, he's an immensely, immensely talented singer/songwriter/guitarist/etc., but there's no pretension behind his performance, no overt demands for respect nor reverence, nothing but the desire to contort and cavort and "move with the moon and the tide," per "These Bodies that Came to Cavort." And the audience was with him the entire way, dancing and laughing with the enthusiasm that can only come from years of devotion to Richman and his work. One man near me even knew every single word to every single song - not just in English, but in Italian, too.

About halfway through the song from last year's Ishkode! Ishkode! called "Outside O'Duffy's," the stage lights went out, plunging the entire venue into darkness. "Wow! That was good, too - just different," Richman said cheerily when they came back on a few seconds later. There was no doubt in my mind that he meant it. Rain or shine, lights on or lights off, Jonathan Richman will be there with a song.

Click the image below to see all of Gary Eckert's photos of the evening. 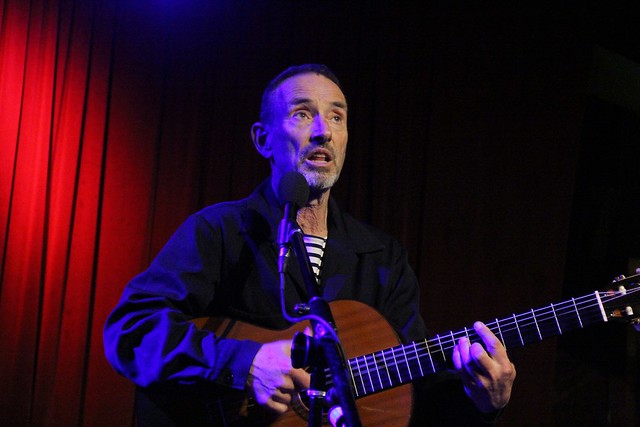