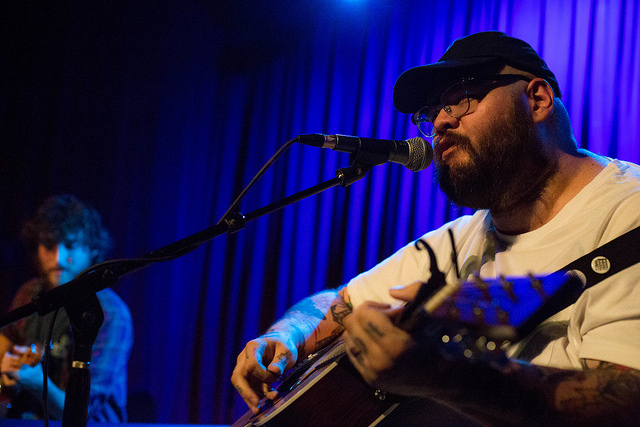 Will Johnson (Centro-matic, South San Gabriel) took the stage Thursday night, singing sad songs in a slightly raspy voice. He moved from tune to tune, worked in a Jason Molina cover -- always a good thing -- and held me spellbound throughout his set. Will told the crowd about a visit with his 98-year-old grandfather that day. "I've got a good woman to help me go to the bathroom," he'd told his grandson just before Johnson left his grandpa's house for the road. "I'm lucky as hell." This simple tale told by the singer is indicative of the entire set, a set of songs that require deep listening and attention, that rarest form of (musical) generosity. Johnson was opening for John Moreland.

Moreland's first song, "Salisaw Blue," came in with a bang. He was accompanied by another musician who played a scorching guitar solo and brash harmonica. The crowd began to move and bob to the first tune. Then, things changed. Moreland's style switched abruptly to mellower, introspective songs about the usual unrequited love, but there was something a bit slick and unconvincing about some of the tamer tunes. Moreland does best when he's performing mid- to quick-tempo songs that burn through and captivate his audience. It seemed, from time to time, that his guest musician held our attention more than Moreland himself. While the crowd put their best proverbial foot forward, Moreland's set -- alas, his latest record Big Bad Luv -- while easy on the ears, failed to really catch hold of me. Again, it's the moments in the more barn-burning tunes that seem, for this scribbler at least, to work best.

Will Johnson's earlier set is not one I would have necessarily wanted to follow as a musician. There is that. Where the honorary Monster of Folk held us captive with understatement and direct melancholy, Moreland seemed to hide at times behind a veneer of well-known tropes like whiskey bottles and broken down loves and an all-too-earnest craft. In now way do I intend to pit either musician against one another; while Johnson carried the night, Moreland's energy and efforts were not by any means wasted on most of the audience. Off Broadway was fairly crowded on the floor, the balcony taken up by bodies. They'd come primarily for Moreland, and he didn't disappoint overall, although my impression of his performance mirrored my impression of the new release.

On Big Bad Luv, we move from the opening song -- the same he opened with at the club -- to an album that seems to peter out here and there. While tunes like "Lies I Choose to Believe" carry a lot of weight and sound, I've found what's elsewhere been praised as a career-defining record to be an uneven effort. My hope was that the live show would somehow make up, as it were, for some of the musical lacunae in the work and, to a good degree, it did. Moreland had a welcoming but intense stage presence as he and his musical cohort continued through the set. I noticed nearly everyone moving again as tempos would pick up, but there was the risk, it seemed, of Moreland being overshadowed again by his companion. All in all, it was a fine evening of straight-ahead folk and rock, but it is odd when such soft and understated songs like Will Johnson's manage to overshadow the performance that most came to see.

Click below for Monica Mileur's photos of John Moreland's performance. 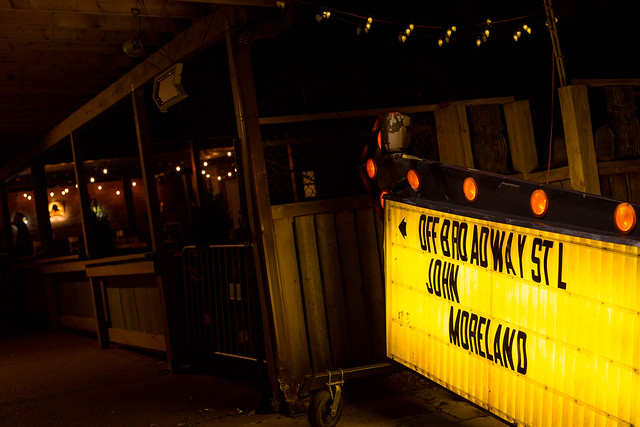