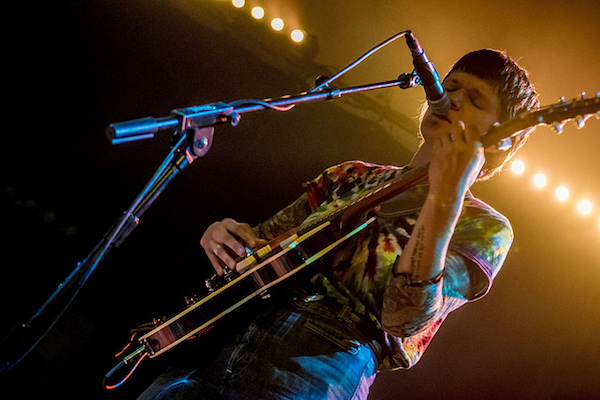 Besides the fact that concerts are a good time to bellow along to your favorite songs and not be judged for it, seeing a band in person often completely changes your idea of them. What with clothing, lighting, and stage banter, it's easy for artists to build up a public persona — one that is all too often wildly different from who they are off-stage or, at least, who you imagine them to be. Simply put, a concert is only half music; the other half is showbiz, baby.

Well, that's how most bands work. And then there's Big Thief, a folk-rock act that is defined, both in sound and attitude, by complete austerity. Their latest release, Capacity, is a thoughtfully-crafted album that pastes together hauntingly intimate stories of darkness and beauty — its subtle storytelling akin to flipping through a family photo album. Paradoxically vulnerable and powerful, Capacity resists — even contradicts — the idea of the stage-persona: sincerity, not sensationalism, is what defines Big Thief.

Preceding Big Thief at the Old Rock House last Wednesday was Twain, a Brooklyn-based folk act. Composed of just Mat Davidson (whom Big Thief frontwoman Adrianne Lencker called "my favorite living songwriter") and his guitar, Twain embodies the minimalist beauty that will define the rest of the night. (This is also his last time opening for Big Thief on this tour). Despite being a solo act, he achieves a richness of sound that might normally be expected of a two or three-person set. His chord progressions and colorful guitar textures, effortlessly filling the room, hint at exceptional musicianship. Davidson, however, is concentrating on anything but the technicalities: with his eyes lowered and his expression thoughtful, he seems completely at ease despite the dozens of people in front of him. His voice — sometimes whispery, sometimes triumphant — evokes an intimacy that is rare to feel at a show as packed as this one. In fact, Twain's songwriting emanates a sense of universal wisdom that seems somehow sacred. There were songs of transient love and transient life, songs of inner peace and outer harmony. The entire experience felt a little transcendentalist, as if Henry David Thoreau himself had come back from the dead, armed with a guitar and an ear for folk music.

Big Thief's Capacity may have some of the most powerful songwriting on any album this year, and to hear its message live is extremely moving: Lencker spins stories of trauma into something simultaneously disturbing and hypnotic, like the haunting image of a mother soaking up her child's blood with a dishrag in "Mythological Beauty" (which happens to be about a real near-death experience Lencker had as a toddler). At the Old Rock House, none of that power was lost in delivery; in fact, it's perhaps even more moving to see Lencker in the spotlight, her eyes closed, singing softly about events that most people would never in a million years talk about. In some ways, what was most jarring about seeing Big Thief live was the openness and honesty of it all. Capacity is a very personal album, filled with stories of abuse and sex, love and death, odes to friends addressed by name. Show after show, Lencker shares these stories with a roomfuls of strangers and, truly, her capacity for honesty is infinitely impressive.

On stage, Big Thief's technical prowess also shines. Their guitar work, sometimes soft and harmonic, sometimes harsh and dissonant, adds another layer of darkness to the album. The grating cacophony at the beginning of "Shark Smile," for example, is one of those instances in which the guitar-work take the forefront. That isn't to say the band's instrumentals aren't always top notch: on the contrary, songs like "Haley" and "Pretty Things" demonstrate a subtle mastery of instrumental lyricism, where the guitar seems to sing along with Lencker's hushed vocals. In fact, some of the more upbeat songs had the entire venue dancing — a fact that I found kind of funny during "Shark Smile," considering the song is about losing a lover in a highway car-crash. In this way, Big Thief is truly remarkable: they can take even the darkest parts of life and turn them into something you can dance to or, at least, something that adds a little light to that darkness.

Click the image below to see all of Ben Mudd's photos from the evening's performances at the Old Rock House. 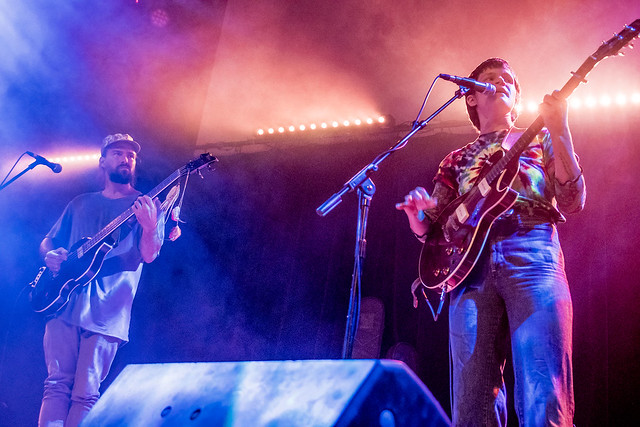