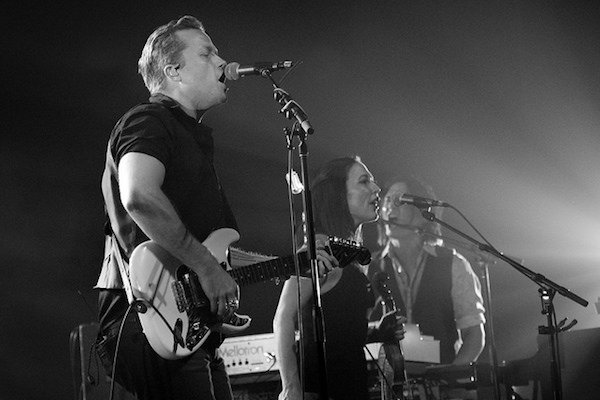 Jason Isbell and the 400 Unit preformed at The Peabody Opera House on Wednesday night and it was fantastic. This show has been highly anticipated since the June 16 release of his sixth studio album, The Nashville Sound. Isbell, a Grammy award winning musician from a small town in northern Alabama, plays with a band of musicians who primarily hail from the Muscle Shoals area, including his wife and accomplished violinist, Amanda Shires. The pair performed as recently as March at The Peabody when Shires opened for John Prine and was accompanied by her husband.

I've been hearing Jason Isbell's name for years. He has a significant following in my hometown of Carbondale, Illinois where long ago he played several shows at the townies' favorite dive bar, PKs. This was when Isbell was still drinking and before he married Shires. Isbell doesn't shy away from talking about his troubled past. He's sober now and the tone of his work has changed drastically over the years. Depending on the sadness of the lyrics you could guess which album the track appears on. In a new song, "Molotov," he describes those younger days: "Ride the throttle 'til the wheels come off. Burn out like a molotov in the night sky."

Isbell first found fame as one of the lead singers for alternative country/Southern rock group Drive-By Truckers. He still performs some of their songs, much to the indulgence of the long-time fans. While playing "Decoration Day," speaking volumes of their creative relationship, Shires took the solo originally written for guitar. Throughout the evening the display of their love, and especially Isbell's adoration for his wife, is inescapable. Most notable is the huge illuminated anchor and sparrow logo suspended centrally above the band. This symbol is also shared as tattoos on the couple's arms and serves as their wedding crest.

During a portion of the show dedicated to songs from his album Southeastern, Isbell tells a story of a time when he and Shires were in separate rooms on opposite ends of a small house writing music. It was during a time when they were still getting to know each other and he wrote this song for her. They would meet in the middle and play each other what they were working on. He said, "My wife will put up with a lot of things, but a piece of shit song isn't one of them. She's a music critic, but thankfully she liked it." There wasn't a person in the theater that didn't already know what song was to follow. The stage lights turn to three shades of blue and for the first few verses of the beautiful and profound "Cover Me Up." The lyrics in this song will never lose their weight for me and I still get chills every time I hear it. A well-deserved standing ovation accompanied.

The genre of country music has always been dominated by white men. In the timely and very necessary "White Man's World," Isbell acknowledges his inherent privilege and recognizes the inequalities he witnesses involving people of color, Native Americans, women, and specifically the unfair reality he fears his daughter will face. He then goes one step further to recollect the mistake he has made of not speaking up against injustice: "I'm a white man looking in a black man's eyes, wishing I'd never been one of the guys who pretended not to hear another white and man's joke. Oh, the times ain't forgotten."

As a lighthearted change of pace, Isbell playfully plugged his new album, The Nashville Sound, as being sold on vinyl in the lobby, as if anyone present wasn't familiar already. He says, "It's also available on compact disc, but technology is changing quickly so be sure to go buy those CDs. They sound just as good, but it's hard to carry around a lot of them so it's best to have one great album." Shires chimes in, "Like The Nashville Sound!" Not letting the joke die just yet Isbell adds, "Like I said earlier, my wife's a music critic and she loves the album."

They played the romantically haunting song "If We Were Vampires" from his new album during the encore. It's one of those songs that seems best suited for a funeral, but will likely get a lot of play at weddings. It's just as sweet as it is weighty and serves as a harsh reminder that the one you love will die and hopefully you'll be dead first as to experience the lesser of the two pains. "It's knowing that this can't go on forever. Likely one of us will have to spend some days alone. Maybe we'll get forty years together. But one days I'll be gone. Or one day you'll be gone." The collective hearts of the crowd were on the floor and the 400 Unit was just stomping them into a pulp.

For the final song of the evening the band broke out the legendary Allman Brothers' "Wipping Post" to send us off knowing without a doubt that the range of Jason Isbell is even more far-reaching than we expected. He can rock. He can make you cry. He has something to say about gender and racial inequality. And he can make you clap on the 1 and the 3.

Click the image below to see all of Monica's photos of the concert. 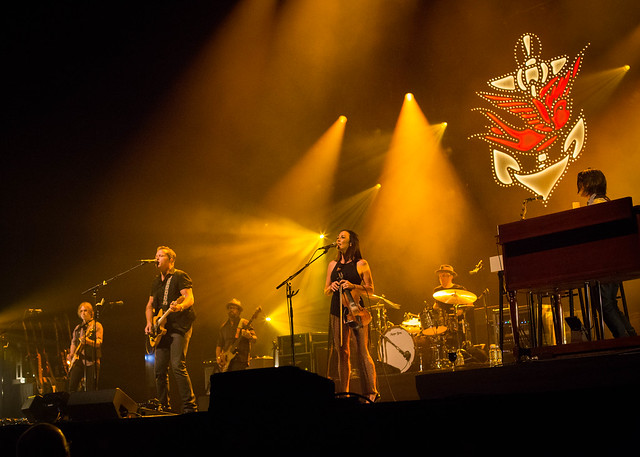