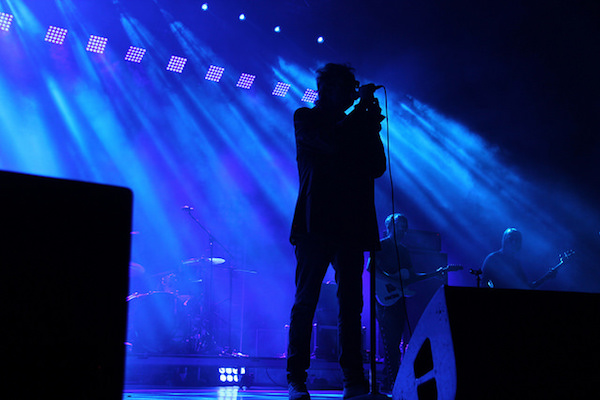 Despite a sweltering July night in St. Louis, fans came out in droves to applaud the beloved Milwaukee-born Violent Femmes and Liverpool-born, new-wave greats Echo and the Bunnymen. Consisting of mostly 40-somethings with some older and younger folks peppered in, the crowd nearly filled the Hollywood Casino Ampitheatre to capacity and cheered loudly as Gordan Gano of the Femmes sang some of their favorites. His voice remains largely unchanged from that of the nasally teenager who wrote most of the songs on the Femmes' first and most popular album when he was just a graduate from high school in 1983.

Consisting of original members Gano on vocals and Brian Ritchie on acoustic bass playing with energetic gusto, along with percussionist John Sparrow mainly on snare drum with brush sticks, and a younger addition on the horns, the Violent Femmes performed in slightly oversized black T-shirts that hung limp with sweat as they kept on in colorful, upbeat tempo. Behind the tenor saxophone, guitarist Ava Mandoza, who opened the show, played backup and added some feminine flair to the otherwise all male Femmes. With the Femmes' set coming to a close, the audience sang along to "American Music" as Gano pointed intimately towards the audience and then back to himself, bringing palpable nostalgia to the joyful present.

While Femmes line-up stood steady alongside one another and sans effects, Echo and the Bunnymen took the stage in more dramatic fashion situating all the musicians toward the rear to allow singer Ian McCulloch to command the show front and center. Layered with choreographed lighting that shifted from neon blue to purple and amber, coupled with smoke both from dry ice and McCulloch's cigarette swirling into the atmosphere, Echo made for an aptly theatrical mood throughout the night. It became apparent that the days of new wave were not totally gone as the Bunnymen began their set by playing some later work indicative of their unique sound with heavy bass syncopation, husky arching vocals that echoed over dancy guitar riffs.

Deep blue lights set the pervading mood, as McCulloch crooned into the microphone and regularly took a walk between the mic stand and the band, occasionally taking a drag between verses. In fact, McCulloch insisted on keeping his fitted blazer on even as he commented at not experiencing "anything like this" and tossed bottles of cold water to grateful audience members, later encouraging a stage hand to continue tossing from an entire case of bottles. It seemed like Echo and the Bunnymen would triumph over the heat even in a blazer and tight jeans, as the members kept themselves regularly hydrated between songs.

However, after just beginning "Bring on the Dancing Horses," McCulloch held up a hand and tiredly requested into the mic, a five-minute breather before immediately exiting the stage, leaving the rest of the Bunnymen no choice but to gradually follow suit after their leader. The audience appeared unperturbed, probably under the assumption that the British band had simply underestimated the infamous humidity that continued to linger into the evening as thunder and lightning approached. As promised, a mere five minutes later Echo and the Bunnymen returned to the stage and resumed playing rich sounds of melancholy with graceful precision. That is until during "Killing Moon" when McCulloch again paused to apologize quickly to the audience and request "the tank" to be rolled out. As the band played on, their hard working frontman breathed oxygen towards the side of the stage so that he could return to the mic, vocals refreshed.

Despite these abrupt breaks, Echo and The Bunnymen continued to entertain adoring fans and concluded with one of their most well-known hits "Lips Like Sugar." Perhaps the Femmes who might be more familiar with the notorious St. Louis summer heat should've warned their tour mates from cooler shores but none the wiser, Echo and the Bunnymen prevailed to put on a memorable show for St. Louisans willing to sweat it out with them.

Click the image below to see all of Gary Eckert's photographs of the night. And if you missed it, check out Rob Levy's interview with Bunnymen guitarist, Will Sergeant. 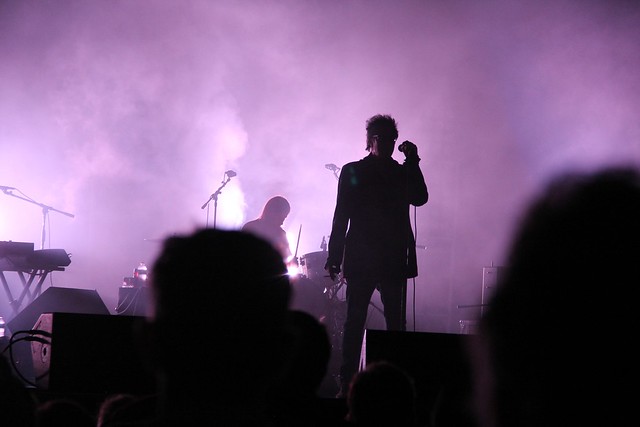